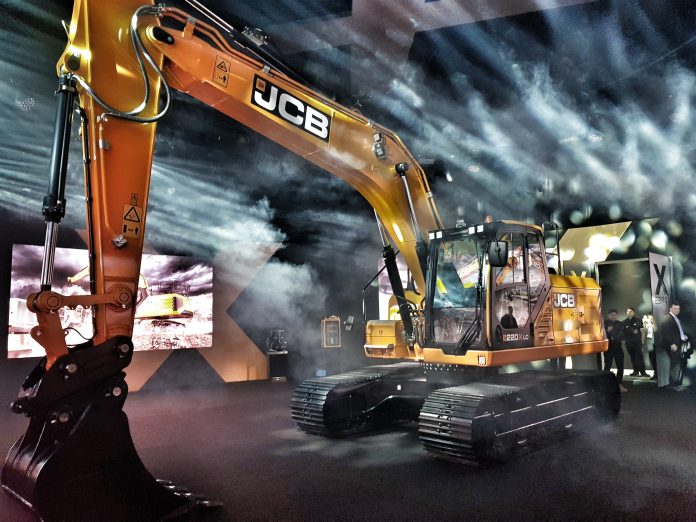 There was a lot of talk about JCB launching a new excavator. The time had come to remove the covers and unveil to the world the latest creation from the British construction equipment giant. Darren Scully headed over to JCB HQ to check it out. 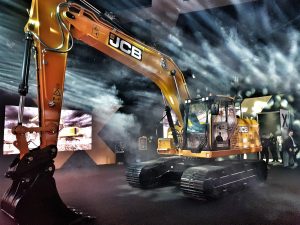 It is always an exciting time when a manufacturer has a new machine to launch. What is it? What will it look like? What does it do? Will it meet the expectations of the market? Lots of questions to be answered. I went over to JCB headquarters, based in Rocester in the heart of England, to see for myself their latest addition to their excavator family. First, it is always a pleasure to attend an event run by JCB. They pull out all the stops to ensure a great experience for the trade media. They want to showcase what they have to offer, and they truly understand how to market their equipment. They really pride themselves on their engineering ability and invest heavily in research and development. The founder, Joseph Cyril Bamford was a top-class engineer and innovator and to him the machine was the star. It is great to see that tradition continues.

This was a two-day event. On the first day we were shown other new members of the JCB family. One of these was the Hi Viz site dumper, which will drastically improve the vision of the operator from the cab. This will no doubt improve safety and help to avoid accidents. Also on show was their latest mini-excavator, the 15C-1. We were then brought to a quarry for a display of their latest skid steers, including the Teleskid.

Later that evening, we were shown their latest invention. Their first ever all electric mini excavator: the E-Tec. This will answer the calls from contractors who want zero emission mini diggers to operate in tunnels and confined spaces. It is also five times quieter than a conventional diesel machine and therefore will be very handy for those working in a built-up urban setting, especially on a Sunday morning. The machine can be ready to go for a full shift after only 2.5 hours of recharging. Lord Bamford himself was on hand to help launch the E-Tec mini excavator and to welcome his guests in a first for JCB.

On the second day, we were taken to a JCB test quarry. Erected there was a very large dome with the X-series logo embossed on it. The excitement was certainly building now. After some speeches by senior JCB executives we were taken into the centre of the dome in complete darkness. Then the music started, and the flashing lights, and the cover started to lower itself to reveal the new X220 excavator. This certainly had the ‘wow’ effect.

Various engineers from JCB then spoke about how they designed and built this machine. The prototype was put on a rig shaker to replicate 15,000 hours of tracking and vibration. 30,000 window and door operation tests to prove component quality. Hot and cold climate testing to experience environments from 55 degrees celcius to -30 degrees. No stone was left unturned to put this machine to the test. JCB had to prove that this new excavator was built tough and built to last.

Down in the pit of the test quarry a selection of X-series excavators was waiting to put on a show. One of the original machines was also there going through it’s paces. The JCB operator display team had a well-put-together routine in place, showing the various applications and uses for this new machine. Rock-breaking, trench digging, dumper loading, and using tilt-rotators were all displayed by the well-drilled team.

An opportunity to get up and close with the machine was also provided. Every part, from the cab to the undercarriage was explored in fine detail. Design engineers were on hand to answer every question. I spoke to Tim Barnett, who is the general manager of the X-series project. I asked him when the first drawings were done for this new digger. “The first sketches were done over four years ago. Within six months of that, we had built a prototype with all the internals up and running” he said. They built several static machines over the next twelve months and were constantly testing and fine-tuning. In total, over twelve prototypes were built before they had agreed on the final design of both shape and working parts. Six production machines were then sent out to customers to get their opinions and to give real-time feedback on their performance. They also sent their test machines to non-JCB customers, as that feedback would be very important compared to other manufacturer’s excavators. The styling of the machine was all done in-house, for it was important to JCB that the styling was both attractive and very functional. An example of this would be the counterweight. I did ask was there any competitor that they were trying to take on with this new X-series. “No, we want to take them all on. We have looked at every 20-ton machine on the market and we are very happy that we have an excavator that will compete with everything that is out there” concluded Tim.

I had an opportunity to look over an X-series excavator on my own. I started in the cab, which has received a considerable makeover compared to other JCB diggers. The CommandPlus cab is very spacious. It comes fitted with a Grammer-built seat with wide adjustable arm-rests. New track pedal design with T-bar comes as standard. The joysticks and switch controls are mounted to pods which are suspended from the seat and move with the operator, for optimum control and less fatigue. Powerful new HVAC, with 11 targeted vents for optimum performance in hot and cold environments. Cool/heat box fitted as standard. A Bluetooth radio is fully integrated into the control screen. USB and phone jack as standard. Improved cab isolation using the latest double-cushion viscous mounts reduces vibration and noise in the cab.

JCB spent over four years developing the hydraulic side of things using the best in Japanese components. Customisable proportional controls allow the operator to set their preference of speed and control of attachments. The power boost button increases pressure by 10% for up to nine seconds to provide extra tear-out in tough conditions. Tracking speed can be found on the joystick for on-the-move tracking change, whilst a convenience button lets you configure a range of functions such as radio mute, camera cycle, or front screen wash. New slew drive provides high torque on acceleration and braking for greater controllability and refinement. Boom float feature allows for smooth grading along hard surfaces and improves breaker efficiency by applying the correct amount of pressure on the breaker tool. Hydraulic pipes and hoses have a large diameter for increased productivity and efficiency. An innovative hydraulic regeneration system means oil is recycled across the cylinders for faster cycle times and reduced fuel consumption.

The whole design is optimised to protect the machine. Side bay doors sit back from the edge for protection and the right-hand platform corner and handrail sit within the slew radius to prevent damage and scratching. Doors are bolted directly to the house frame and remain rust-free due to a zinc coating on all wear faces. All fasteners have a zinc finish for improved corrosion resistance, a new bolt-and-washer design protects paint from damage. A new recessed counterweight design protects the rear end and machine branding from impact damage. The slew ring is machined after manufacturing and welding to ensure a flat surface that reduces slewing noise. The undercarriage has a fully-welded X frame construction for long-term durability. Rigid upper frame, flat revolver side skirts and double skinned doors with new plated hinges provide greater strength. There are plenty of handrails and safe access to the upper-deck, which has plenty of room to carry out service duties.

There is little doubt that JCB have put a lot of effort and thought into the new X-series. From my point of view, this new machine does look the part. The cab is impressive, as are the new panels and paint job. There have been paint issues with previous models and JCB seems to have addressed that. They have put huge effort into research and design and putting the machine through its paces. This will no doubt improve reliability, and JCB have said that customer feedback was crucial in designing the X-series.

As we all know, you cannot tell how good a machine will be until it has several thousand hours worked up out in the field. When I was given a tour of the factory that builds this new excavator I was really impressed with the facility and the assembly line. That gives me confidence to say that the JCB X-Series could really give other makes a run for their money. I think many in the plant industry will wish this machine every success. Does it have the X-factor? Well, if it performs any way as good as the JCB marketing department, then this new excavator will certainly succeed.