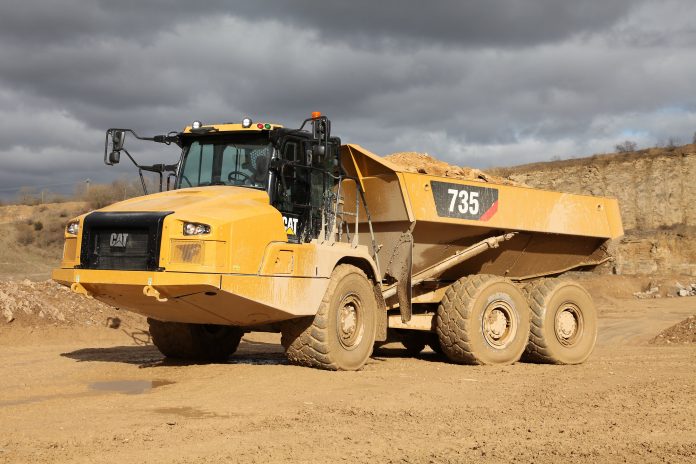 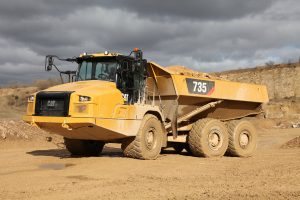 In addition, the design of the 730 and 730 EJ is enhanced with automatic retarder control and a hill-start feature. The 735 retains these features from its C-Series predecessor and further incorporates significant design refinements that include a new Cat® C13 ACERT™ engine, Cat CX31 transmission (also on the 730 and 730 EJ) and structural and dimensional modifications that reduce empty weight by 22 percent, while retaining the productivity of the outgoing 735C. These features combine for an up to 19-percent gain in fuel efficiency.

The cab’s new external “spinal-ROPS” design incorporates a rear-quarter glass that eliminates a structural pillar in the C-Series design, for enhanced rear visibility. Also, a new “wake-up” feature initiates the machine’s displays when the door is opened. The door is of a lighter, stronger design with a shut-assist feature for improved sealing against dust infiltration. The overall cab design results in lower inside sound levels at 72 dB(A), a 7 dB(A) reduction compared to previous models.

Optional new infrared glass reduces solar heating inside the cab, and left- and right-hand sliding windows increase ventilation and facilitate communication with workers and the loading-vehicle operator. A new, automatic climate-control (HVAC) system positions more vents above and behind the operator for increased heating and cooling efficiency. A new heated/cooled seat is designed to give operators increased adjustments that allow “dialing in” personal-comfort settings; also, the passenger seat now uses a flip up/down design and added cushioning.

For added safety, a new lighting system, controlled via a ground-level switch, illuminates the cab’s entry steps and hitch area. Optional integrated payload lights provide an external indication of payload levels for the loader operator. Optional long range, LED work lights improve visibility at night or in situations of lower visibility. New cab-mounted mirrors, including a front-visibility mirror, enhance all-around visibility for the operator. Exterior cab features include an improved flexible lower fender and a low-profile exhaust stack that need not be removed for transport.

The optional Cat Connect PAYLOAD technology calculates payload via sensors on the walking-beam suspension, and load-status lights at all four corners of the cab roof ensure visibility to the loader operator from any angle. In addition, the standard Cat Detect/Stability-Assist system monitors the working angle of the tractor and body, as well as the grade, and cautions the operator if the machine is approaching the set threshold angle, stopping the dump process if continued action may result in potential tipping. 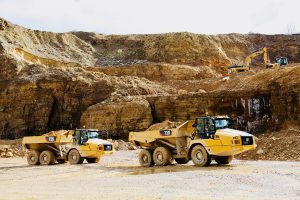 A new combined transmission-and-hoist lever provides efficient, single-lever control of vehicle speed and body-hoisting functions to reduce operator effort and to automate repetitive operations. A switch in the cab allows operators to choose either manual or assisted hoisting control, the latter selection automatically applying the waiting brake, shifting the transmission to neutral, and raising the body to maximum angle at engine high idle. Assisted hoisting returns the body to the lower position at the flick of a switch. Both raise and lower functions feature automatic cushioning and speed reduction at limits of movements.

New buttons in the combined transmission and hoist lever allows setting (limiting) machine speed and selecting the transmission waiting brake. In addition, a new shift-protection system brings the truck to a safe stop if a directional shift is made while the truck is moving. The new combined shifting/hoisting lever also incorporates a parking position. A tertiary brake switch sets the parking brake in the unlikely event of main and secondary braking malfunction

The 730 EJ is designed to eject loads while traveling, providing positive dumping of the entire load, and also to work in areas with overhead restrictions and with soft underfoot conditions with improved machine stability.