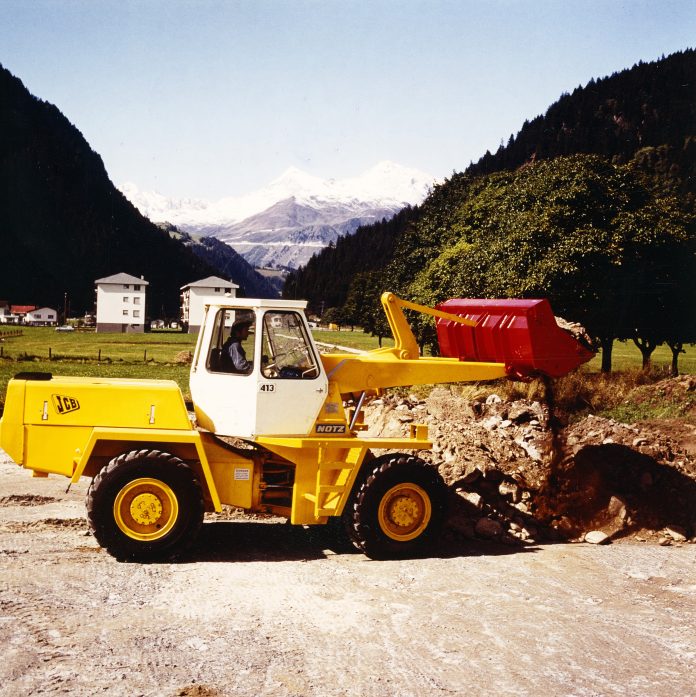 JCB is celebrating 50 years of wheeled loading shovel manufacture – with production hitting record highs.  Over those five decades, the company’s award-winning loader range has expanded beyond recognition, introducing many market-leading technologies and establishing JCB as a global leader in the loader business. 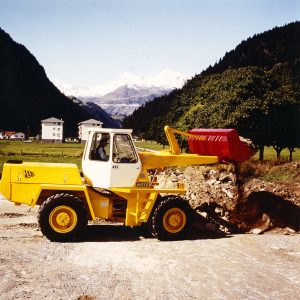 The company entered the wheeled loader market with the acquisition UK-based Chaseside Engineering, taking on its seven rigid axle machines. Relocation of production lines from Chaseside’s plant in Blackburn, Lancashire took several months and it was all systems go by the start of 1969, which marked the start of the first full year of shovel manufacturing at JCB’s expanding Rocester factory in Staffordshire. In that first year, the fledgling wheeled loader division would build just 298 machines, catering primarily for domestic customer demand. 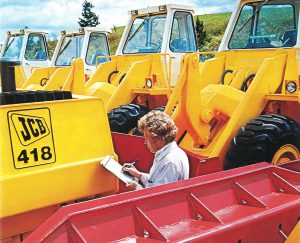 JCB Chief Innovation and Growth Officer Tim Burnhope said: “Over the past 50 years, JCB’s wheeled loader range has evolved into a major part of our product portfolio. Fifty years is a long time but our sights are firmly on the future and we are committed to bringing new levels of innovation to this range. The launch of the spacious CommandPlus cab on our wheeled loaders was a pivotal moment in this machine’s history and this innovation really did put operator comfort at the heart of the design.

“JCB now offers 25 different wheeled loader models and manufactures the product on three continents. With our innovative range we are very well placed to increase our sales in a sector which has grown rapidly around the world for three consecutive years.”

The first JCB-designed machines arrived in 1971, with the launch of the 413 and 418 models, replacing the former Chaseside models. These shovels featured a cab mounted on the front section of the articulating chassis, to provide the operator with an improved view of the working area. They were also equipped with an oscillating centre pivot, to ensure that all four wheels remained in contact with the ground, delivering maximum tractive effort.

At that time, JCB launched a tracked loading shovel, the 110, the first of its type to feature a hydrostatic transmission and twin tiller loader controls. The machine was the first to be awarded with a Design Council Award in 1972. The crawler loader would continue to be developed, with the 112 and 114 models, well into the 70s.

In 1973 the 423 and 428 were launched, taking JCB into heavier wheeled loader territory. A year later the Design Council again recognised JCB, for the 418 design, the company’s second award in just two years for what was still a fairly young business unit. 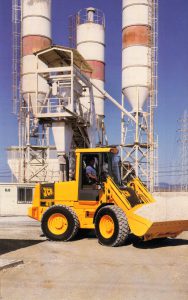 By the early 1980s the division had expanded again, with the introduction of the 428 landfill compactor. JCB recognised that different industry sectors required individual machine specifications, a focus that has remained to this day, with JCB building specific models for construction, quarrying, agriculture and waste handling. The first 410 Farm Master model would be launched just two years later in 1983, continuing a relationship with the farming community that has was established along with the company in 1945.

By that time, the 410, 420 and 430 models had also arrived, again moving the sector forwards with the introduction of four-ram loader linkages. These parallel lift arms would prove essential for materials handling duties in particular. JCB still offers customers a choice between a four-arm lift package or the Z-bar linkage favoured by the quarry industry on many loader models.

Another sector with which JCB has enjoyed a positive relationship is the military, the company developing the 410M-1B military wheeled loader in 1984. As well as being specifically designed and built to meet the needs of military operation, each machine was shipped with £1,000 of spare parts, to ensure continued operation in even the most remote areas.

JCB continued to develop its growing range of wheeled loaders, moving into the compact market in 1987. The 406 was the first JCB compact loader and the first to have the cab mounted on the rear section of the articulating chassis. This model was soon joined by the 408 in 1989 and the 408 Farm Master in 1990. 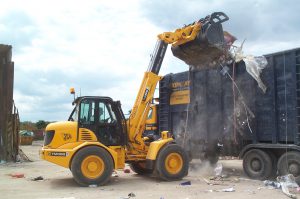 Following the success of the compact models, JCB went on to redesign its heavier loaders, with the launch of the 411, 412S and 416 in 1994. These new machines all featured a much-improved operator’s cab, mounted on the rear section of the chassis for the first time. They were followed just a year later by the 414S, 426, 436ZX and JCB’s first telescopic boom wheeled loader, the 409TM. With 22 years of market-leading telescopic handler experience, JCB’s decision to combine the talents of its wheeled loading shovel chassis with a telescopic boom from the Loadall division proved an inspired one. It brought together the versatility of a telehandler boom, with the precision control of an articulated machine.

Additional compact models followed in 1996, while 1997 would prove one of the most decorated years for the company’s loader business. In 1997 JCB picked up a Queen’s Award for Export Achievement for the loader range, along with a Royal Agricultural Society of England Silver Medal Award for the 412 Farm Master Servo Plus. A new range-topping 456ZX model joined the line-up, alongside 410ZX and 411ZX hydrostatic compact models and two additional Telemasters – the TM200 and TM270.

If 1997 was a big year for products, 1999 would prove an even more eventful year for the business, with a move to purpose-built new premises in Cheadle, Staffordshire. With the ability to boost production, the multi million pound facility – producing under the name JCB Earthmovers – would prove critical to further fuel product expansion and sales growth.

By the early 2000s, the company’s range of wheeled loaders and telescopic loaders was well established, with the addition of new 407, 408 and 409 hydrostatic loaders, the TM300 Telemaster and the 456HT loader. In 2006, JCB Earthmovers was again given a Queen’s Award for Enterprise, in the International Trade Category, a feat that would be repeated in 2009.

The company’s Dieselmax engine range, fitted to a number of the loaders, went on to power the firm’s Dieselmax streamliner to a world land-speed record for diesel cars in 2006, establishing JCB as a world-beating engine manufacturer.

The first decade of the new century culminated with the launch of the 436E-M  (Military) and 436E-MWW (Medium Winterised Waterproof) military wheeled loaders, with the MWW variant the first to be completely waterproofed and winterised. 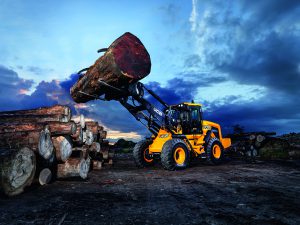 As with other JCB businesses, much of the second decade of this century has been taken up with meeting exhaust emissions legislation, as JCB’s wheeled loaders have passed through Tier 3 and Tier 4 Interim and Final standards. The company is currently preparing to provide customers in Europe with Stage V compliant models in 2019 and 2020.

2014 saw the dawn of a new era in cab design with the launch of the all new ‘JCB CommandPlus’ cab. The powerful JCB 457 was the first machine to show off the completely new cab, offering operators the ultimate in comfort. This totally new ROPS structure has A pillars that have been moved out to the same width as the rear of the cab, providing a larger interior with a panoramic front windscreen. The machine features JCB’s Command Driving Position, with revised pedals, a new adjustable steering column and seat-mounted hydraulic controls.

This decade has also seen JCB’s wheeled loader line continue to expand, as the line-up has grown with both larger and smaller models. The largest loader, the 467, launched in 2012, while the company’s smallest model, the 403, arrived in 2017.

The company is now readying its extensive range to meet the needs of tomorrow’s customers, with the introduction of Stage V emissions compliant powertrains. And with production at record levels, JCB Earthmovers shows little sign of slowing down.