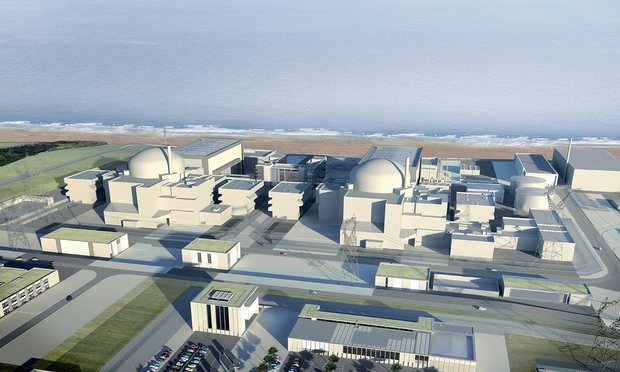 The crown estate has waded into the battle over Hinkley Point, pointing out that offshore windfarms are already being built at cheaper prices than the proposed atomic reactors for Somerset.

While not arguing the £18.5bn nuclear project should be scrapped, the organisation – still legally owned by the Queen – said that the government’s current Hinkley review makes it a good time to consider the advantages of other low carbon technologies.

Hinkley C’s future is in doubt. Let’s turn our sights to offshore wind

The crown estate said that windfarms at sea will be on course to meet 10% of the country’s electricity by 2020 while Hinkley Point C is not expected to be constructed till the mid 2020s, to produce 7%.

“The [wind] sector has undergone a sea change over the last few years, driven by rapid advances in technology, cost and the industry’s ability to deliver on time and to budget,” said Huub den Rooijen, the director of energy, minerals and infrastructure at the crown estate.

“In the Netherlands, there has been an even bigger step change. In the busy time around the EU referendum, many people will have missed the publication of their most recent offshore wind tender.

“Although there are differences in terms of regulation, most would agree that the Dutch are now going to be paying the equivalent of about £80/MWh for their 700 megawattwindfarm. That is significantly lower than Hinkley Point at £92.50/MWh.”

The comments come after an unpublished report by the energy department shows that it expects onshore wind power and large-scale solar to cost about £50-£75 per megawatt hour of power generated in 2025. New nuclear is anticipated to be around £85-£125/MWh, in line with the guaranteed price of £92.50/MWh that the government has offered Hinkley’s developer, EDF.

Government data published last Thursday showed that renewables generated a quarter of the UK’s electricity in the first quarter of this year. About half of that came from on and offshore wind combined.

The Hinkley project has been hit by controversies since it was first raised as a possibility by EDF more than nine years ago. There have been delays and concerns about the costs of the £18.5bn project. In recent days a new row has blown up about the wisdom of allowing EDF’s proposed Chinese partner access to the UK energy infrastructure for national security reasons.

Den Rooijen said the government’s committee on climate change has urged ministers to consider alternatives if there are delays to renewing our nuclear fleet. “We should remember our seabed is a powerful energy asset. At present, we have 2,200 wind turbines in operation and under construction taking up less than 1% of our total seabed,” he said.

“National Grid estimates that nearly half of all power could be generated from our seabed by 2030 through offshore wind, combined with tidal power lagoons and strong electrical connections to our neighbouring countries.

“We have an inexhaustible supply of reliable and clean power right on our doorstep, and competitively priced offshore wind now offers a mature part of the solution for the UK’s energy mix.”