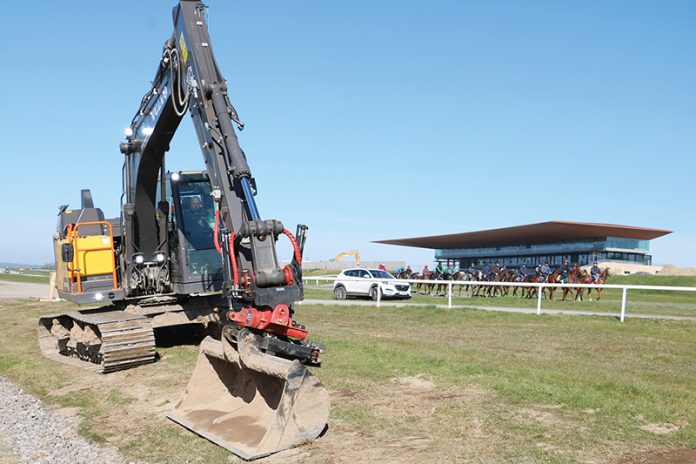 Horse racing is known as the sport of kings. This country is blessed with some amazing race courses. The Curragh racecourse is undergoing a massive facelift and installing the training gallops is John Ormonde. With his Volvo excavator and Rototilt attachment, he is approaching the final furlong. Your commentator is Darren Scully.

I will have you know that I am a very charitable man. Over the years I have given hundreds of euro to sick horses. I just didn’t know they were sick when I backed them. I was delighted when Aiden O’Neill of Cullion Plant Service invited me to the Curragh racecourse. A day out at the races sounded to me to be a perfect way of unwinding and to look at a different type of horsepower.

The illusion was quickly shattered when I was informed that I was requested to look at a Rototilt he recently sold to equine facility contractor John Ormonde. Not to worry, as the sun was shining and there were horses out training when I arrived. Tiltrotators are starting to gain traction in the Irish market, and this would be an opportunity to speak with a contractor to explain why he bought his first one.

John Ormonde is the owner of John Ormonde, Wexford Sands Ltd. This Enniscorthy-based contractor is highly regarded in the world of horse racing as his company installs the gallops in racecourses and private training stables around the country. They specialise in the construction of riding arenas, which include gallops, lunge pens and a range of top performing surfaces. He started the business in 2005, and before that he was working for a general contractor.

He also has a business which sources the special silica sand that is used in the equine industry and transports it to various locations around the country. On the plant side of the business he owns four excavators, three 14-tonners and one 21-tonne. His preferred digger brand is Volvo and I ask him to expand on that.

“I have Volvo trucks on the road, and I liked them, so I decided to give the Volvo diggers a chance. After we got our first one, we found it very comfortable and they have a great centre of gravity, so they are not bouncy on the dig. They are beefed up and perfect for the job”, he said. Getting on to the tiltrotator, which is a competitive market, I ask him why he bought Rototilt. “We bought it off the dealer, Cullion Plant Service, and I found the owner of that business, Aiden O’Neill, a very easy guy to deal with. He was always available and was always working within our timeframe. He had the fit out of the tilty done in a day when the Volvo arrived from Pat O’Donnell’s. He did exactly what he said he would do, and the price was very competitive.”

So, what convinced John to buy a Rototilt, seeing as his business has managed quite well up to now without one? “We hired in a sub-contractor last year and he had one fitted, and once we saw it in action, we knew we had to get one. Before, we would use a blade on the digger but now, we can use the grading beam on the Rototilt which is a far better job”, said John. Everything is performing as expected, and a very interesting statistic John provides me with is that his Rototilt is saving him 25% work time on a drainage job. Without doubt, the way this attachment pays for itself is cutting down on time. Ormonde has more works to complete in the Curragh and contracts for some well-known horse trainers. He is convinced that tiltrotators are the future for his business, and he intends to purchase more.

Operating the Volvo EC140E with the Rototilt R5 is Wexford native, Eoin Murphy. He is operating diggers for the last 25 years. His first machine was a Hitachi 063. He is now seven years working with John Ormonde and is enjoying every minute of it. His new duo combination arrived in February, and he was in the deep end as he had never operated a tilty before.

Eoin was very much used to the old school ways, so I asked him how he got along in the new school. “It took me about a week to get used to it, I took my time to understand all the new functions and how to get the best out of it. For the work we do shaping banks, and with the type of ground we work on, it is a great tool as we don’t have to track the digger all over the place.” Already, Eoin is seeing the benefits when it comes to spreading sand on the gallops. He says that it is cutting down the time required by 50% compared to the old methods. I ask him would it be difficult for him to go back to the old school? “I couldn’t go back to the old way, this is the way forward with the Rototilt, it makes my life so much easier and more productive”, he concluded.

I got to have a chat with Aiden O’Neill of Cullion Plant Service, who is the dealer for Rototilt for all of Ireland. I ask him how the year is going so far and what are the hopes and dreams for the future. “2019 has got off to a great start for us, with a lot of sales confirmed in the first few weeks of the year and continuing steady as we go on. The range of customers is still varied, from owner-operators to larger companies, covering a broad range of work, from companies working on electrical pylons, golf course construction and general construction sites – as well as the more specialist jobs such as the upgrade works of the gallops at the Curragh”, he said.

We are delighted to have John Ormonde on-board as a customer, he is well respected in his field of work, with a fleet of machines to do the job”, said Aiden. There are many in the industry who are seeing the benefits of tilt attachments and would like to learn more and perhaps have a go. The good news is that Rototilt will be at the CQMS show in Punchestown this June. I ask Aiden: what does he expect? “Of course, we are really looking forward to CQMS in June, it will be our first trade show in Ireland, and we will be showing a full range of Rototilt products and attachments as well as a live demo, and we will be showing potential customers how they work and give them a go. We are confident of doing a few deals at the show and starting new relationships”, enthused Aiden.

After Eoin gave a good demonstration of his newly-acquired skills on the Rototilt, it was time to park up and let me have a good look at both machines. The Volvo EC140 was first launched back in 2015. The one I am with today is new and was supplied by Pat O’Donnell’s. It is a lovely looking machine, well designed and engineered, which is what you would expect from Volvo.

The Volvo-built D4J, Tier 4 final provides 119 horses at a slight gallop. Inside the beautifully designed cab is the 8-inch display. Displaying the rear camera, the display still shows the essential machine operational gauges, eliminating the need to switch back and forth between screens. A side-view camera is optional. The right-side control panel keypad has been redesigned and includes a Bluetooth function, allowing operators to make phone calls and stream music. Climate control has been integrated into the keypad for easy adjustments. Functions such as the windshield wipers, cameras, auto-mute or power max can be assigned a shortcut button on the joystick, which gives operators the ability to select these functions without stopping operations.

A seatbelt warning alarm is issued if the ignition key is turned while the seatbelt is unbuckled. Another screen on the LCD display shows Volvo’s password-protected attachment management system, which allows you to store the hydraulic settings for up to 20 different attachments. The attachment response sensitivity can be adjusted via the keypad. A boom float function allows hydraulic pump power for boom lowering to be saved and used for other functions, which reduces cycle time and makes grading easier. An auto idle system reduces engine speed to idle when levers and pedals are not activated after a set period, and an auto engine shutdown feature automatically turns off the engine after a pre-set amount of time (the default is five minutes).

The boom and arm design include internal plates to give extra pressure support. There is very well laid out and safe access all around the machine, the service points are all in the one place and the service doors can be easily unbolted to give you more room. A great digger which is ideally suited for the work John Ormonde does.

The Rototilt R5 is for excavators with a total machine weight of 14-19 tonnes.  The R5 has the same characteristics as the rest of the Rototilt R range, which results is simpler service and a longer service life. There is an integrated carrier, improved central lubrication (ILS) and a new type of hydraulic connection. The rotor body consists of an entirely new, improved casting.

This tiltrotator is equipped with the optional smart ICS control system and Secure lock. It can be integrated with the machine’s grade control system through the Rototilt positioning solution (RPS). RPS is now available for the most common, well-established machine control systems on the market. When you combine the Rototilt R5 with the Volvo EC140 and at the controls is a skilled jockey, you will certainly clear the fences and be a winner alright!