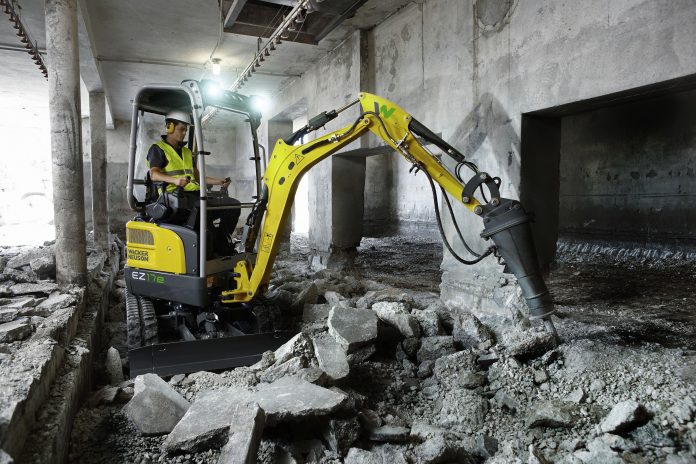 The Wacker Neuson Group continued on its growth path during the first half of 2019. Revenue rose 15.2 percent relative to the prior-year period to reach a new record high of EUR 950.7 million (H1/18: EUR 825.1 million). “The first half of the year showed us once again that our solutions meet the needs of our customers,” explains Martin Lehner, CEO of Wacker Neuson SE. “We gained shares in numerous markets, driven largely by our many product innovations – which are key competitive differentiators for us. The raft of developments that we showcased at bauma in Munich last April illustrate that we are ideally positioned to continue along this growth path and achieve the medium-term goals set out in our Strategy 2022.”

In 2018, the Group’s growth was hampered by major bottlenecks in the global supply chain. “The situation here has eased considerably,” continues Lehner. However, reducing the number of unfinished machines caused by these bottlenecks resulted in additional effort that temporarily slowed productivity at the manufacturing plants. Profit before interest and tax (EBIT) for the first half-year rose 7.4 percent to EUR 84.5 million (H1/18: EUR 78.7 million). At 8.9 percent, the EBIT margin was slightly lower than the prior-year level (H1/18: 9.5 percent). This result was further squeezed by increased production and logistics costs as well as ongoing restructuring measures at the US plant in Menomonee Falls. Nevertheless, the Group expects the progress that it has already made in the US to have a tangible positive impact on profitability in the second half of 2019 relative to the previous year.

Growth across all reporting regions

The Group’s rise in revenue was fueled by growth in all three reporting regions. Revenue for Europe, which accounts for almost three quarters of the Group total, rose 15.5 percent to EUR 692.3 million (H1/18: EUR 599.2 million). This was driven by strong demand from the European construction industry and a well above-average boost to business with agricultural equipment. Revenue generated by Weidemann- and Kramer-branded wheel loaders and telescopic handlers was up 31.8 percent to EUR 152.0 million (H1/18: EUR 115.3 million).

Revenue in the Americas region amounted to EUR 229.5 million, which is a rise of 13.7 percent (H1/18: EUR 201.8 million). Adjusted for currency effects, this corresponds to an upturn of 7.2 percent. This growth was fueled by a number of factors including the Group’s ongoing progress in expanding the independent dealer network in North America and positive developments in South America, where the Group achieved double-digit gains.

Revenue for Asia-Pacific increased by 19.9 percent to EUR 28.9 million (H1/18: EUR 24.1 million). The Group continued to ramp up production at its plant in Pinghu, China, which it had opened at the start of 2018. The OEM collaboration concluded with John Deere in the summer of 2018 covering mini and compact excavators also got off to a good start. The Group reported significant revenue gains in China, whereas business in Australia developed slightly below expectations.

During the first six months of 2019, cash flow from operating activities came to EUR -144.7 million and was thus much lower than the prior-year figure (H1/18: EUR -35.3 million). This was primarily attributable to increased inventory levels and a rise in trade receivables. In anticipation of the positive market and order situation as well as the leading international trade show bauma, the Group built up more inventory than in previous years. The inventory also includes pre-buy engines which the Group has held in stock specifically for the transition to the EU Stage V emissions standard in Europe. The Group will bring these to market by the end of 2020. Furthermore, the Executive Board introduced measures aimed at significantly reducing inventory of finished machines over the coming months. These include reducing output at certain production plants. The days sales outstanding increased from 64 days in the previous year to 73 days. In addition to the increase in revenue, this figure was impacted in particular by an unfavorable regional and customer mix. Free cash flow for the first half of 2019 amounted to EUR -186.2 million (H1/18: EUR 11.5 million).

Despite growing signs of an economic slowdown, rising levels of uncertainty and an increasingly challenging market environment in recent times, the Wacker Neuson Group’s key target markets are in good shape. Order intake remains at a high level thanks to strong demand from the construction industry in particular. The Executive Board still expects revenue for 2019 as a whole to lie in the upper half of the projected range of EUR 1,775 to EUR 1,850 million (2018: EUR 1,706.5 million). This corresponds to a rise of 6 to 8 percent.

The Group expects profitability for the second half of the year to be above the previous year’s level. Positive impetus is anticipated from the Americas in particular as this region reported a negative EBIT figure for the third and fourth quarters of 2018. “We are making good progress with our restructuring measures,” adds Lehner. The Executive Board still expects the EBIT margin for 2019 as a whole to lie between 9.5 and 10.2 percent.