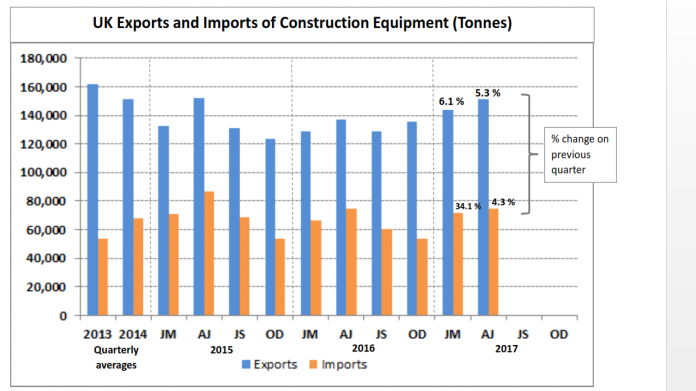 The increasing levels of exports of equipment can be attributed to both improving demand in many of the major overseas markets, as well as the benefit of the weaker £ exchange rate since the middle of 2016, following the Brexit referendum. 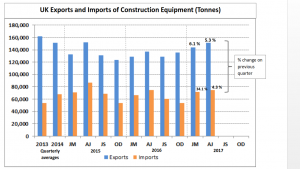 The USA remained the top destination for UK exports in the first half of 2017, accounting for 19% of total exports on a weight basis, and 23% on a £ value basis. Collectively, exports to EU28 countries accounted for 48% of total weight of machines exported in the first half of the year, and 44% of £ value. These were similar proportions to the 2016 annual levels.

Imports of equipment also showed further increases in Q2, and are following the same seasonal pattern as the last two years, “peaking” in Apr/Jun quarter, and “bottoming” in Oct/Dec. In Q2, imports showed a 4.3% increase on Q1 2017 in weight terms, and a 2.6% increase on a £ value basis, reaching £398 million. As with exports, imports were also at their highest level since Q2 2015 on both a weight and value basis. In the first half of 2017, imports are 15.8% higher than the same period in 2016 on a value basis at £786 million. On a weight basis, imports are also 3.4% ahead of 2016 levels in the first half of the year. 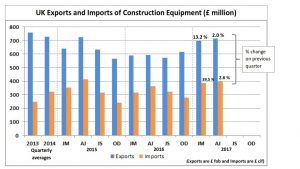 (* The UK construction equipment data exchange is operated by Systematics International Ltd., a specialist data processing company. The CEA has access to high level data from this scheme, via a partnership arrangement with Systematics.)

Japan remains the highest single country source of imports in 2017, accounting for 19% of total imports of equipment in the first half of the year on a value basis. Imports from Sweden also remain strong this year, accounting for 17% of total equipment imports, and have taken Sweden from 5th in the 2016 ranking to second place so far this year.

The UK remains a net exporter of construction and earthmoving equipment, measured in both weight and value terms. In Q2, the trade surplus increased slightly on Q1 levels to £316 million. This was lower than the surplus of £340 million in Q4 2016, but after this, was the highest quarterly surplus since Q4 2015.

The data used in this report is taken from HMRC official trade statistics, and covers construction and earth moving equipment (excluding separate trade data for components and parts). Trade data has been used from 9 different HS (Harmonized System) codes. This consists of the following at the 4 digit level:

8474 – crushing and screening equipment, and concrete, mortar and other types of mixers