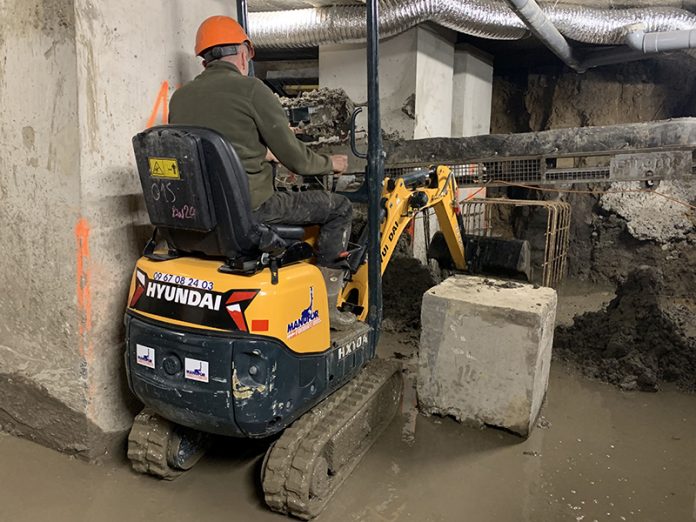 Manufor Fondations is underpinning the foundations of the “Knibbeler” apartment block at Saint-Saulve near Valenciennes. An interesting but highly technical project with numerous problems meant that the company had to acquire an HX10A Hyundai Construction Equipment compact excavator from Promatex.

Established in April 2008 by Bertrand Wydooghe, SARL Manufor Fondations specialises in micro-piles, foundations, short piles, underpinning and repairs after damage. Based at two sites, one at Sailly-sur-la-Lys (Pas-de-Calais) which includes the head office and the other at Haubourdin (Nord) which includes the depot, the company has 21 employees and undertakes around forty construction projects per year, “ranging from a gauge-laying project to monitor cracks, starting at 400 Euros, to an almost 4 million Euro project like that at Saint-Saulve”, explains Bertrand Wydooghe.

The company has a turnover of around 4 million Euros and is showing annual growth. ” We have three divisions: Manufor Matériels, Manufor Conseils (which has just been established), and of course Manufor Fondations. Naturally, three complement each other”, adds the Director, formerly the Project Manager for Queyrie (Eiffage) and later Business Manager at Freyssinnet (Vinci).

The company, which is based in the north of France, has spent just over a year working on the site of the Knibbeler building which dates from the 1960s in Saint-Saulve.

The building has 58 co-owners who noticed the cracks appearing in the facades. Following consultations and legal assessments, it was found that the building was slowly subsiding, and the foundations of 12 to 15 metres depth had to be underpinned as they had not been supported.

The company often undertakes underpinning work, but was here faced with one of the major difficulties of the site: its restricted size. ” Also, the plans from when the building was constructed were incorrect. We should have found 136 piles, and we’re now on 160 and the work is far from complete. The originally specified lines of 4 piles have “transformed” into lines of five, six or even seven. There is no symmetry relative to the building. The plans for electricity supply and drainage are also incorrect” , explains the Director of Manufor Fondations.

“The space available for access below the building is very limited, and we’ve had to adapt our equipment accordingly, in particular, the excavators”, he adds. For example, a conveyor belt and not a wheeled loader extracts the soil from the working face to the outside.

Costs similar to a used machine

But for this project and its particular features, the HX10A compact excavator was the ideal machine. Size, weight, and price were the main criteria for Bertrand Wydooghe, and the HX10A was perfect. ” Also, its cost is close to a used machine at around 2000 Euro”, he adds. ” In contrast to other models of the same tonnage, its power is very satisfactory. The operators are delighted”, confirms Bertrand Wydooghe. On this project, equipped with a 50 L bucket, the HX10A is in demand for clearing and loading the conveyor belt.

A feeling shared by Steve Olivares, who has worked for Manufor Fondations since 2011: “This model is very agile but also flexible, and for a small machine it’s pretty stable. It’s also manoeuvrable to fit between the piles. It will even go below the conveyor belt. The position of the controls is very ergonomic and convenient. It’s easy to get to grips with. “.

Finally, Bertrand Wydooghe would certainly buy another HX10A from Promatex, because ” when we get towards the back of the building, will have to continue to load the conveyor belt which will be even longer then”, says the Director. ” The idea is to get the same one because its height (1436 mm) and width (730 mm) fit everywhere”, he concludes.

The HX10A crawler excavator in: