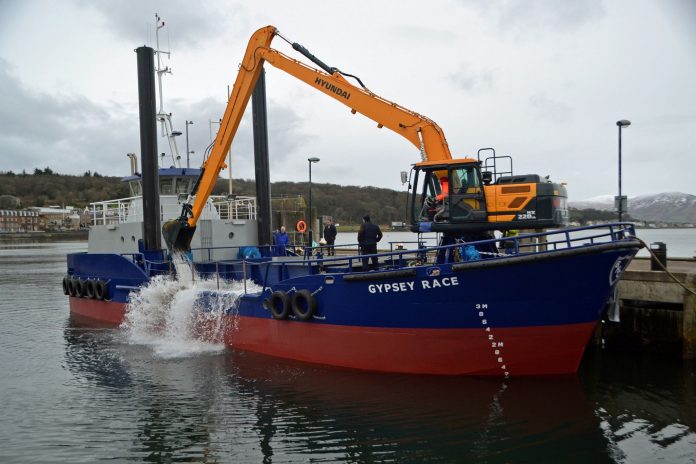 Hyundai construction machinery dealer Young Plant Sales, based in Doune Scotland, has recently supplied a bespoke 22 tonne HX220LR Long Reach excavator (first one sold) to Ardmaleish Boatbuilding Co, based on the Island of Bute.  The machine has been fitted onto a newly commissioned dredger, which is working in Bridlington Harbour for the Bridlington Harbour Commissioners. 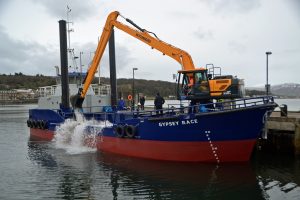 Ardmaleish Boatbuilding Co, headed up by managing director, Ewan Ferguson, won the contract to build the new dredger barge via a company called Marine Design International who put a specification out to tender, on behalf of the Bridlington Harbour Commissioners, to construct the vessel.  Mr Ferguson said, “We received the spec for the new build and we priced competitively for the contract and we were successful.” 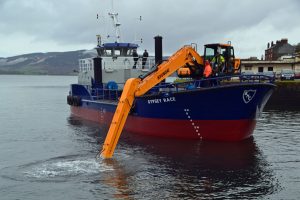 Build on the new vessel, the Gyspey Race, began in April 2016. Within the contract there was a provision for Ardmaleish to purchase a second-hand excavator for the new dredger.  Mr Ferguson said, “I did some extensive research on excavators online and got in contact with Leigh from Young Plant as I knew that the Hyundai excavators, were one of only a few machines that could be fitted to a dredger without major alteration.”

Mr Ferguson continued, “Leigh had a brand-new excavator in stock but it was a 3-year old model – we discussed other alternatives – and for £10k more the dredger barge could be fitted with the latest Hyundai long reach model built to our specification.”  Mr Ferguson added, “It was an easy decision to make – we had very latest Hyundai model for not a great deal more money.  Also, I had researched into second hand models and I really did not like the idea of putting an old machine on a brand-new boat!” 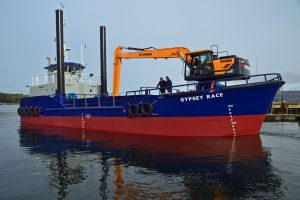 The Gypsey Race was built to replace Bridlington Harbour Commissioners old dredger which was also called the Gypsy Race, but without the e!  This was scrapped some time ago in 1997 as the dredger was some 40-years old.  Bridlington then used contractors to dredge the harbour which was a costly affair hence the decision to commission the brand-new dredger.

The Gypsey Race is 25.46 metres in length, 8 meters in breadth, 102.7 tonnes and is made of steel. This is the 10th Newbuild for this yard.  Fitting the HX220LR to the vessel was carried out in stages.  Mr Ferguson explained the process he said, “The machine was mounted on the barge once build was complete.  We pre-designed the stool and flange to suit the HX220LR from drawings provided by Young Plant, which made it relatively easy to fit.

The vessel is being used to keep Bridlington Harbour dredged to maintain safe passage for all vessels in and out of the harbour and it is envisaged that the vessel will be chartered out to other similar small ports and inlets to dredge their spoil.