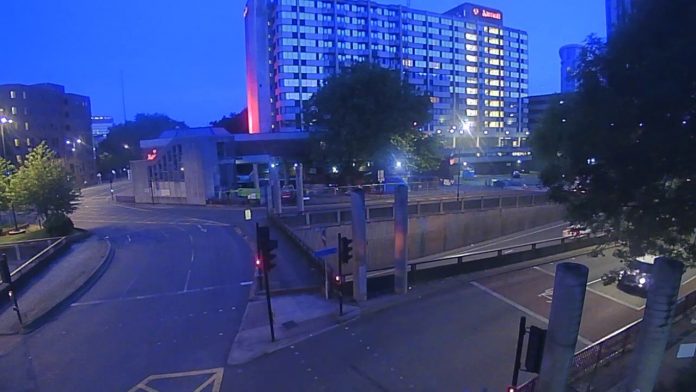 Manchester based AW Demolition Ltd have recently completed a complex demolition project for Bristol City Council on one of the busiest roads in the city.

The contract to remove the pedestrian walkway and demolition of a pair of reinforced escalator buildings challenged the company more form a logistics standpoint than from the actual demolition work involved. The structures stood across the Old Market Roundabout in Bristol city centre which is in turn located above one of the city’s busiest roads, the A4044. 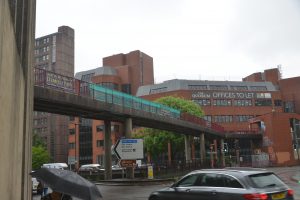 The bridge section themselves ranged in size topping out at 28m and 70 tonnes in weight. Elevated on reinforced concrete columns, the footbridge spanned from the adjacent Marriot Hotel and escalator building, across the slip road onto the A4044, 4 lanes of the A4044, the off slip road and culminating in the final escalator building and access stairs, all of which were destined for demolition. While the demolition works could have commenced in-situ, the severe disruption to the traffic flow through the area would have been immense therefore the decision to remove the sections and recycle off-site was taken. 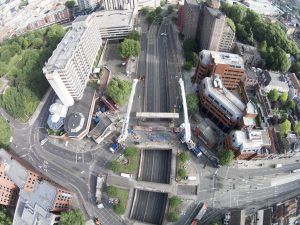 Prior to any demolition work taking place, a thorough decontamination of the escalator buildings at each end of the structure was undertaken. Years of decay, vandalism and pigeon infestation had left the buildings in a severe state of dilapidation. Along with a program of asbestos removal, the buildings were cleaned and cleared from an internal birdcage scaffold. Once cleaned and soft stripped, the basements on each structure were in-filled with concrete as the local authority were worried for the structural integrity of the surrounding ground once the cranes were in position to lift off the bridge sections. 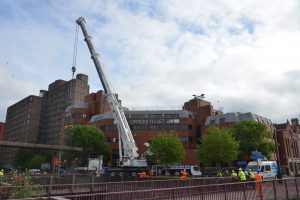 With the preparatory works complete, full and partial road closures were applied for with traffic management schemes put into action with night works being undertaken to remove the steel handrailing to the footbridge prior to the full road closure for the first of the lifts to take place. Heavy lift specialist, Baldwins were brought in to lift the sections off with Midlands based heavy haulage specialists TDR supplying the transport to remove the three largest sections back to Manchester for processing. With the road suitably protected under a layer of heavy duty crane matting, two Baldwins Liebherr LTM1500 500 tonne capacity cranes were rigged to undertake a single lift each and a tandem lift of the large centre section.

With the road closure operational until midday on the Sunday, the 16-hour operation went like clockwork with the last section lifted off and on the low loader by 10am on the Sunday. This gave the AW Demolition team enough time to clear the site ready for the traffic to flow. Partial road closures during the following fortnight saw the Marriot escalator building demolished during a number of short evening possessions. “We would have liked to have worked through the night to remove the building in one go” explains Austin Wilkinson “but the proximity of the hotel required us to extend the demolition time to four nights.” With this first structure removed and the ground reinstated, the AW Demolition team were able to prepare the final bridge sections for removal. Again using the services of a 500t capacity crane from Baldwins, a full road closure on the roundabout was put in place. At the same time as the final bridge section was being lifted from its bearings, the final escalator building was being demolished. Working off heavy duty crane mats the company’s Volvo EC360 excavator equipped with Lehnhoff Variolock coupler and Rotar selector grab was used to remove the redundant escalator workings before quickly swapping attachments to work on the reinforced concrete structure. “The Lehnhoff system has revolutionised our operation and made it much quicker for us to undertake any demolition operation.” Commented Wilkinson “We only need a single excavator to do this job whereas, prior to fitting the fleet with the hitches, we would have sent two machines down here. That would have meant two lots of transport, diesel and two operators. It simply saves us time and money.” Along with the Volvo excavator, the AWD team also had a Doosan DX210W rubber duck in operation. Equipped with a hydraulic breaker the machine was used to break out the concrete supporting columns of the footbridge. With the base of the column suitably protected with plywood sheets to stop any material from dropping onto the live dual carriageway below, the experienced team from AW Demolition quickly removed the four columns situated on the kerbside.

The final works for the contractor included the reinstatement of the pathways where the escalator buildings were situated along with brickwork repairs to the hotel building where the bridge was joined to the structure.

Working in very tight confines and under tight time constraints, the AW Demolition team completed the project within time and to the full satisfaction of their client.