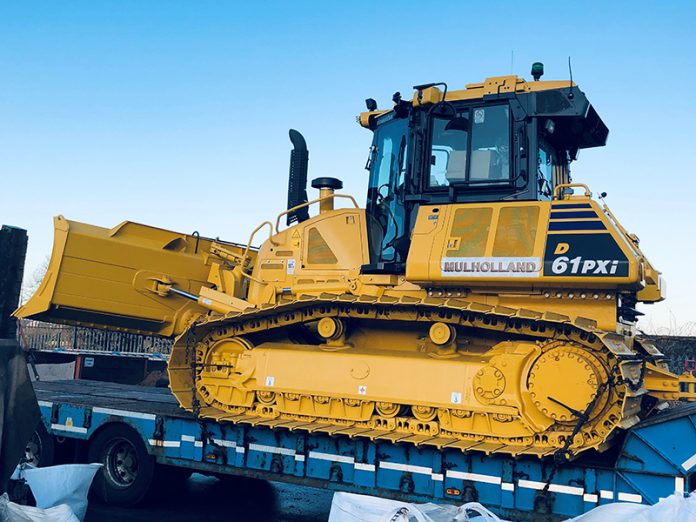 Mulholland Contracts Ltd. is a second-generation family run business founded by Trevor Mulholland in 1974. In the 46 years that they’ve been operating the company has established itself as one of Scotland’s largest privately owned construction companies.

With a team of over 400 people and 60 excavators, the company prides itself for being able to offer the full spectrum of construction works for the house building sector. From civil engineering and bulk earthmoving to roads and Multi Utilities Services, they are the first and last on site.

At the end of 2019, the company made the decision to purchase their first bulldozer. They had previously been using a hired bulldozer but with the demand for this machine type growing it was clear that it would be more cost effective for them to purchase their own. In addition to this, the company prefers everything in-house so that they can provide customers with fast and efficient services and excellent communication.

Prior to purchasing the bulldozer, Mulholland Contracting Ltd.’s fleet consisted of excavators all supplied from an alternative manufacturer. However, when considering their first bulldozer, it was decided that the company should explore their options. They approached Marubeni-Komatsu after people within the industry recommended Komatsu bulldozers over competitor machines. After this first meeting with the sales team they were impressed by their knowledge of the machines and the location of Marubeni-Komatsu’s sales and support team in Scotland.

This resulted in the company receiving their first bulldozer, a Komatsu D61PXi-24, in December 2019. This mid-size bulldozer is an all-round performer featuring a super slant nose design to enhance the operator’s visibility. The dozer is also integrated with Komatsu’s machine control system allowing it to complete automated operation from heavy dozing to fine grading. This greatly enhances work efficiency and productivity in any application, especially when a specific level must be guaranteed. “Our aim is to be innovative leaders in our marketplace, so it made sense to choose the intelligent machine control bulldozer over the standard option.” Says Kevin Breen, Finance Director.

The machine has already been put to good use at a new housing estate in Midlothian where it has been creating landscape bunds and it will soon be moved to a large housing estate project in Edinburgh where it will be spending the next few years.

“Initial use of the D61PXi-24 bulldozer has shown that our decision to go with Komatsu has been well judged.” Says Kevin Breen. “Our experienced operator has also given positive feedback on the machine compared to other manufacturers.”