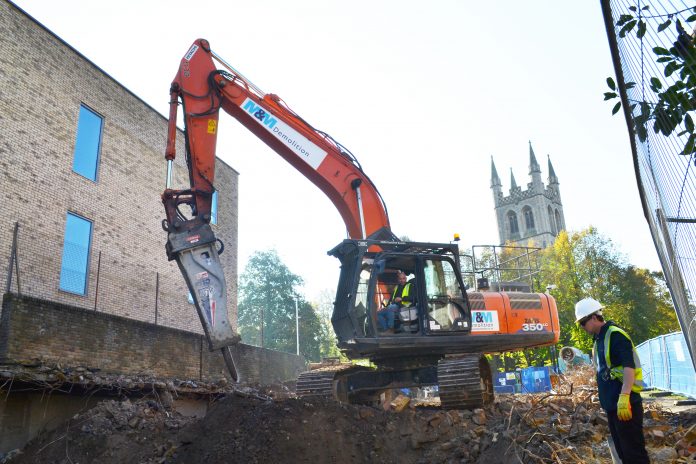 M&M Demolition carry out demolition and enabling works across all sectors, undertaking projects throughout the UK from private individuals to large multinational companies. As a member of the National Federation of Demolition Contractors (NFDC) M&M take their onsite health and safety responsibilities very seriously. Having just completed another successful site audit they also recognise the need for safe and efficient equipment in use on demolition sites bearing their name. 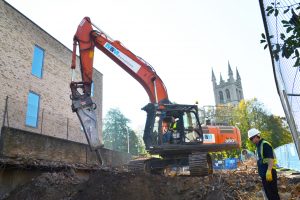 M&M Demolition Managing Director; Danny Wall first approached Warrington based attachment specialists ECY Haulmark back in the Summer of 2017 with a view to installing the revolutionary OilQuick automatic quick coupler to their new Hitachi Zaxis 350 machines. At the same time M&M took delivery of a VTN MD410 selector grab and VTN FP30 concrete processor from ECY Haulmark to complement their brand new thirty-five ton Hitachi machines. M&M Demolition have been successfully utilising the machines fitted with OilQuick and VTN attachments on various projects since.

More recently M&M Demolition placed an order with ECY Haulmark for a Furukawa FXJ375 hydraulic breaker to add to their arsenal of attachments, the breaker was again fitted with an OilQuick OQ80 attachment bracket by ECY Haulmark, to complement their Hitachi 350 machines.

ECY Haulmark recently paid a visit to M&M Demolitions Overton Road site in Brixton, South London, where the contractors are overseeing an eleven-week project for the local authority adjacent to St. Johns Angel Town C of E Primary School. The overall works involve the demolition and ground remediation of former boilers rooms at the far end of the site, which are being demolished to basement level. With a small pedestrian walkway next to the redundant building the area had been deemed unsafe for local people to walk through as the growing presence of squatters in the building was causing public safety concerns for the police.

The FRD Furukawa FXJ375 breaker was in use on the machine as M&M complete the latter stages of the project breaking out the lower portions on the basement at the front of the site, mainly comprising of steel reinforced concrete and brick. M&M Demolition operator Steve Perry reported “life as a machine operator is so much better when you have OilQuick on your machine” and added “the new breaker has also been performing really well during this project. The FXJ has a consistent and fast strike rate, its penetrating and breaking through the concrete base here very efficiently”. He continued “I like this breaker a lot, it’s as good, if not better than any other breaker I have used before and having been in demolition along time, I have tried most brands at one time or another”

M&M Demolitions Senior Project Manager; Karl Larcombe, who is overseeing the Overton Road contract commented “With this being a small site it’s great to be able to have just the one Hitachi 350 fitted with an OilQuick coupler onsite, as we can bring along a selection of attachments fitted with the OQ bracket, we can get the project completed in a fraction of the time it would have taken making manual attachment changes. With OilQuick we can react quickly with one machine on site. If Steve was breaking out with the hammer and a wagon turns up to take away a load of waste, he can quickly change the breaker to a bucket and get the wagon loaded and off site, It’s just such an efficient way of working, a total no brainer. I estimate this project would have taken another two weeks to complete without the OilQuick system installed on the machine and attachments”