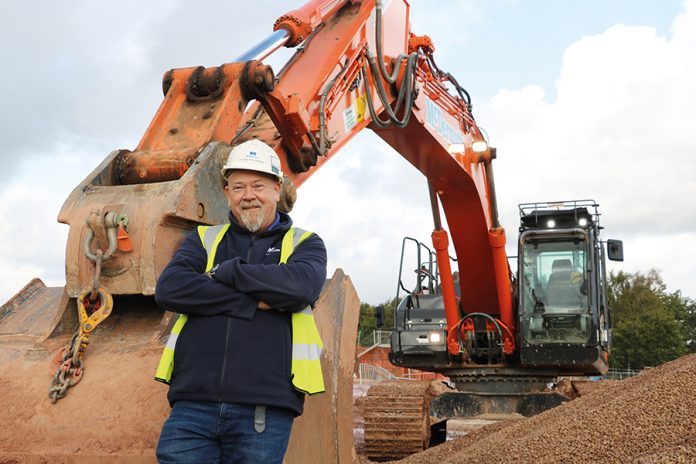 More and more sites are becoming technologically advanced. The days of the profiles and string are long gone. One company that really understands how technology can help the bottom line is McDermott’s. Darren Scully visited them on a site in Mansfield.

Over the past few years I have noticed more and more construction companies purchasing technology. Now as we know the world is awash with technology. Everywhere we look there is some new device or gadget on the market that will claim to make your life that little bit easier and unless you own it, then you are missing out bigtime. In my world there is good and useful technology and then there is useless technology. An example would be a dishwasher that makes a beeping noise when it is finished cleaning your dishes, telling you it must be emptied instantly, even if you are watching the Crown or Game of Thrones. I mean, what is the point of that. Then there is good technology, tech that will really make a positive difference to what you are doing and help you be more productive and save on a lot of time and money. Without doubt machine control is the most progressive and productive technology to come into the plant industry since the invention of the quick hitch. The digger operator is now the master of his own destiny. He doesn’t need to wait for the engineer to mark out the ground or to get profiles banged in. Now he can have all his holes dug with the aid of some satellites that are spinning at thousands of miles an hour around the planet. McDermott’s wanted some good technology and that is why they went to Topcon and invested in what they had to offer. I wanted to see more and so I went to Mansfield in Nottinghamshire and got a closer look at the tech, machines and people working together in unison to get the job done. It was a fun day too.

When I arrived on site and signed in there was a lot of machinery in action. They were hard at work building a large distribution centre and the usual machines who would expect for such a job were hard at work. Excavators, dozers, dumpers, all very busy and not a profile in sight. I went to sign in and meet up with some representatives from Topcon and the main contractor McDermott’s. I think we need to give a bit of background about McDermott’s as they are celebrating their 25th birthday and they have come along way since their foundation. A family owned business, they were established in 1994, with experience and expertise in the construction industry that has developed over the years to enable them to anticipate and respond quickly to changing customer requirements. With a team of over 300 people, they have the skills and resources to work across the length and breadth of the UK, offering customers a consistently dependable and professional service. They currently run a substantial plant fleet and have invested heavily with Topcon with regard machine control. They want to maximise that return and that is why they have in their ranks a machine control manager who is Steve Lowe. He is also an engineering surveyor and has been working with McDermott’s for the past nine years. He took on the role of machine control manager five years ago and loves the challenge. I ask him to explain the process. “You do a model on the computer and then you upload that into the system in the relevant machine. This technology has made my life a lot easier. No more out on site in all weathers marking out the ground, now it is in the hands of the operator. I think it is best explained that the operator now has an engineer in the cab with him. Everything he needs is now on that screen. From my perspective as an engineer surveyor it is saving me a massive amount of time and saves hugely on the digging out of material” said Steve. McDermott’s use the Topcon technology for digging out foundations, drainage and services, final trims and have currently got over eighteen systems fitted to their machines. The plan would be in the long term to have every machine in the fleet fitted with a system. With regard training up new operators on how to use the systems, Steve believes that is very straightforward. “I give the operator the basics and then will get an experienced machine control operator to show him how best to use it and be his mentor. I have had operators start with me with zero machine control experience and by the end of the day they are flying. It is really easy to use” he concluded.

Also, on the job today with me is Melanie Burch who is a business development manager for Topcon. Normally her working week is looking for new business and maintaining the relationship with her existing customers such as McDermott’s. Typical clients are civil engineering companies and groundworks contractors. Most of us have watched the TV show the Apprentice, where budding business stars want to work with Lord Sugar. I now audition Melanie for a role in the show by asking her to pitch to me Topcon. If I was Darren Scully and Sons, obviously an amazing civil engineering contractor, why should I buy the Topcon technology? “Machine control will make a good operator even better. You are making your building site a lot safer; you are taking the man out of the trench and you are also upskilling your staff. You can buy or hire the equipment, to get a machine wired up is a minimal investment and once you are up and running with it you can be a lot more responsive on site, as if there are any changes to ground conditions then the engineer can upload the latest changes into the system immediately. If you want to, you can hire the equipment, so you can get a really good understanding of the advantages before making that commitment to purchase” said a confident Melanie. I am totally sold on it but amazingly only about 10% of the UK’s construction equipment uses machine control. In Scandinavia they have a usage rate of 80% for machine control so we are only dipping our toes in the water here. “We are very far behind others with regard the technology. The amount of companies that I visit that I am still educating them about machine control is staggering, they know about it, but many think their jobs are not big enough to warrant the use of the machine control. We know from experience that our systems on average can save a contractor 20% on their bottom line and that can equate to a lot of money. You are saving on an engineer’s time, they don’t need to be on site as often, and you are saving on machine wear, saving on fuel.

The site was a hive of activity, diggers, dumpers and telehandlers busily at work. Sitting up in his Hitachi 350 excavator is John Keenan. He has been operating excavators for a quarter of a century. His first machine that he professionally operated was a Hyundai Robex 130. He first started with McDermott in the early days but went working for other contractors up North, but now he is back again. He got his first taste of machine control about three years ago. “I think it is a great tool, it gets rid of the engineers for a start, we are not waiting around for them anymore. We can just get cracking now” said John. I ask him did it take long for him to pick it up. “Not really, it is simple enough, you just zoom in and out on the screen, that is all you need to know. It is very straightforward to follow, if you can place a bet on your phone, then you will have no problem using this” he laughed. What about old school operators that might be a bit reluctant to use it? “Just give it a go, you will be surprised how easy it is to use. I was a little sceptical when it first came out, but now I just can’t do without it. To fit this to your machine really is a no-brainer”. John is currently digging out the drainage on this site. The Topcon system tells him where to dig, how far to dig down, all he must remember is to have the correct bucket fitted for the right job. I also got to meet up with Pat Cunningham who is operating another Hitachi excavator. He is on the levers now for the past thirty-four years and has seen much in that time. He started his excavator life on a Kubota mini-digger and even had his own small plant hire company in London, before the downturn saw him go out of business. His favourite digger is the Hitachi 225 which he feels is perfect for groundworks. So, what is his view on the Topcon machine control? “It is brilliant, huge time savings, I don’t need an engineer to check a level for me, you just go out to dig now, and that saves a lot of money. This is very easy to use; I think anyone would be able to use it” said Pat. For a man who is so experienced on excavators I had to ask him what makes a good operator? “Oh, that is an easy one, common sense. It can be in short supply, depending on the job, but any operator who has a bit of common sense will do fine in this world” concluded Pat.

All the operators I have spoken too, all say the same thing, that the Topcon machine control, keeps the engineer away from them. They don’t need him or her. The information is uploaded onto their cab system and away they go. I was starting to get a picture in my head that the engineer on this job must be a horrible person, as they were delighted that he never visited them. I was nervous going into his office for a chat, maybe he will throw something at me, growl, and basically talk to me as if I was something that fell of his muddy boot. Actually, he was a very nice chap called Jimmy Stevenson who is a senior engineer for McDermott’s. His job is to plan out what exactly the machines will be doing and then he will mark it out on his computer and then download all the relevant info. He is using the Topcon systems now for eighteen months and his overview is pretty positive. “Yes, it is really good, it is an excellent system. It works well, it saves me a huge amount of time, I have probably spent two hours getting line work ready for two hundred hours of machine work. In the past without the GPS I would have struggled to keep up with the machines. A classic example is putting in foundations in an open field. Before you would have to visit the site several times, using pins, profiles and paint. If there was any damage done or bad weather, you would have to go out again. Nowadays it is all done in the comfort of the office and drawn out on the computer and then given to the machine operator on a USB stick and then downloaded, away he then goes, and that is it” concluded Jimmy. So, you see, there is very useful tech and then there is not so useful tech. Without doubt, the Topcon machine control is very useful technology, with a bit of wizardry and a hint of black magic thrown in.