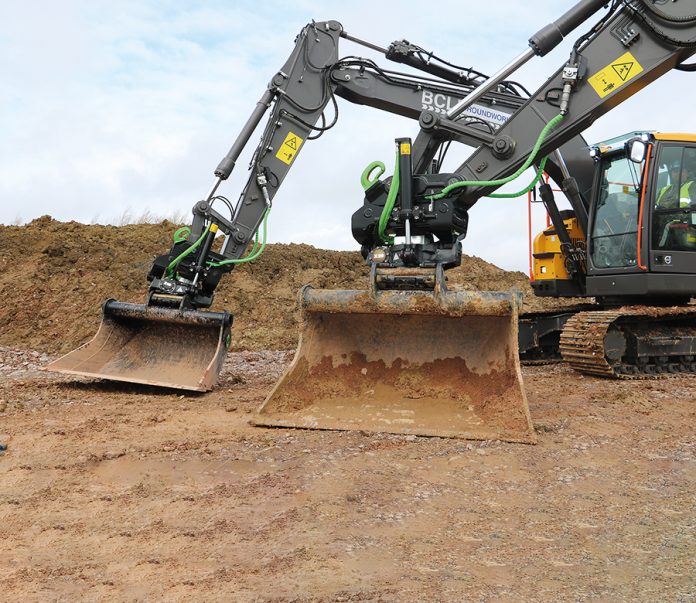 in Sweden. Competition is fierce in the tilty market and service can make all the difference when it comes to making a sale. Darren Scully visits a contractor in Glastonbury to see that service in action.

I always wanted to visit Glastonbury. It is a world-famous rock music venue and every June; thousands of music fans visit here for the festival. It was an ambition of mine to come here to pull off some serious moves, impressing many with my dancing skills, shaking my arms and legs and moving to the beat. Well my wish did come true and I saw a lot of cool moves with some serious twisting, but not in the way I had expected.

I had got word that Somerset contractor BCL Groundworks was about to receive a brand-new Volvo ECR145E excavator fitted with a Steelwrist. I met up with Steelwrist’s Pat Bulcock, and we went to see the new acquisitions on a housing development just outside the town. Pat had some finishing touches to apply to the new tilty and was also there to give some training to the operator. It gave me an opportunity to speak to some seasoned operators and get their views on how a tilt-attachment makes their day a little easier.

BCL Groundworks is a progressive business based in Bridgwater in Somerset. It has a large fleet of excavators and contracts carried out typically include earthworks, formwork, foundations, and drainage. Today its new Volvo ECR145 has just been delivered and the low-loader is leaving the site as we arrive.

On the end of the dipper it is fitted with a Steelwrist X18 tilt rotator and bucket. You can spot a Steelwrist from a mile away as the distinctive bright green hoses are a giveaway. I am also a big fan of the sideways ‘S’ which looks like a superhero logo.

After signing in we meet the lads on site and get the introductions out of the way. Straight away Pat is out with the grease gun ensuring both the digger and the attachment get topped up and we are soon ready for action. Before we get down to the views of the operator perhaps, we need to investigate the history of Steelwrist and indeed tilt attachments in general.

It all started with Ackerman who invented quick couplers back in the ’70s. Quick couplers then got very popular in Sweden and in 1986, a company called Dento, started to develop a tilt rotator. In the ’90s the tilty started to become very popular across the entire Nordic region as contractors saw how they could make a job more profitable.

In 2005, Steelwrist is founded by Stefan Stockhaus and Markus Nilsson. They focused on product development and in 2008 they launched their own quick couplers and control systems. In 2009 they became a preferred supplier for Volvo Construction Equipment and in 2011 they created the World’s first fully steel cast tilt rotator. They expanded their product range which includes buckets and last year they moved into their new factory and offices in Rosersberg in Sweden. They now have a presence in all the important international markets and currently see themselves in the top two providers of tiltys in the UK.

The current boss of Steelwrist UK is Pat Bulcock. He started out in agriculture and in the ’90s he became a tractor salesman. When farming took a tumble, he moved to London and started working in various sales roles including a stint selling photocopiers, which he believes was excellent training in the cut-throat world of business. He then found himself working for Benford Terex selling dumpers in the Midlands. He was headhunted by Volvo and after a while he got involved with a dealership selling various well-known brands. He got involved with tilt-rotators and in 2009 he became the dealer for Steelwrist in the UK. They had no presence over here at the time, so Pat had a very tough job getting the brand known. He worked extremely hard at it and since that time he believes that he has sold over 600 units to UK customers.

Back on the site in Glastonbury I get a chance to chat with seasoned operator Chris Gay. He is a Wiltshire man and has been operating diggers for over twenty-five years, starting out on a JCB backhoe. I am starting to think every operator started their career on a JCB.

Chris has been working for BCL for over a year now and is really enjoying the job. Before joining BCL he had never operated a tilt-rotator, so he was the perfect candidate to explain to me how it helps him with his work.

“I was a bit apprehensive at first because I had never operated one before,” says Chris. “I had watched some videos on YouTube to get some tips and it was difficult at first because you are trying to do six different things at the same time. I am quite proficient at it now and it comes naturally.”

I ask Chris to expand on how it helps him with his daily tasks and saves him time. “I don’t have to track as much as I used to. The ability to get into so many tight spots is really good and I reckon it shaves off about 25% of the time you would usually spend, depending on the application,” he says.

He also points out that he strongly believes that these tilt attachments will become very popular. Well if Sweden is anything to go by, I would have to agree with him. Currently over 90% of all excavators between three and thirty tonnes in Sweden are fitted with a tilt-rotator. That is an eye-opening statistic and proves how efficient they are. Chris also tells me that now he is using a Steelwrist he will find it impossible to going back to a machine without one.

I watch intently as he puts the machine through its paces. He is putting on a bit of a show for me, the bucket twisting on its axis as he moves the gravel around. He also shows me how he can set the tilty up for his own preferences through the control screen. It even has his name on it, so if another operator gets in, he can change the settings for his own tastes without upsetting the other operators’ settings.

It was time to move on and see another Steelwrist customer. We travelled out to the countryside around Taunton and there I met the owner of David Civil Engineering. Shane David is a civil engineer and formed his business at the turn of the century. They carry out a variety of jobs including earthworks and heavy civils. The company currently runs a fleet of twenty-five excavators from one tonne up to forty tonnes, mainly Volvo and Liebherr machines. In 2010 Shane decided to invest in a tilt rotator and bought his first Steelwrist. Ever since then, every excavator that he has bought now comes equipped with one.

Tilt-rotators are not cheap, they represent a very significant investment and can cost a quarter of the price of the digger they are attached to. I ask Shane to explain how he makes his money back. “All our work is measured rates and priced jobs. It is crucial to us to get the job done quickly and ahead of time. The Steelwrist saves us a lot of time and you can clearly see that on the site. They are a significant investment, but they do last and we can swap them onto various machines, and we have several that are about to go on their third machine.”

Something else in his yard catches my eye. A digging bucket is sitting there with a strange looking Leica digital box attached to it, I ask Shane to explain more. “We have a GPS control system fitted to our excavators, if you change the bucket, that will affect the set up of the machine. So, you must go into the menu on the control system and change the settings,” he says. “This device on the bucket transmits a signal via Bluetooth, so as soon as the machine picks it up it automatically changes the settings on the system, so the operator doesn’t have to do it.”

It occurs to me that this will be the future and will come standard with all buckets.

Who is the typical customer for Steelwrist or indeed any tilty manufacturer? “The type of customer changes year on year,” says Pat Bulcock. “Historically for us it was the owner/operator, the one man show. Now we are seeing the small to medium size contractors with a fleet up to fifty machines investing with us.”

The typical work includes groundworks and house building. Pat believes that labour shortages are encouraging contractors to buy his products. “It is very difficult to get labourers on building sites,” he says. “A tilt rotator will remove an element of the needed labour and machine numbers. A lot of my customers see this benefit and that is why the order book is increasing.

“This whole concept was about efficiency,” adds Pat. “In Sweden it is a big country with a small population. They needed machines to do various tasks with few men involved and that is why the tilt rotator became so popular there. I can see the same happening here as it becomes more difficult to hire people for groundworks. We are very inefficient in this country with regards to construction compared to other locations. This needs to change, the whole thinking needs to evolve.”

Pat also believes the reason why his business is successful is because of the back-up service. Steelwrist have four mobile service engineers on the road daily and one engineer permanently in the workshop. A lot of the work involves installing new products but there is also time dedicated to service work and call outs.

“There is very little service work with our products,” says Pat. “There is no periodic maintenance programme, the tilt rotator just does its work. They give very little trouble and customers normally send their tilty to us for an overhaul after about eight thousand hours.” They currently offer a two-year warranty on all products from the day of installation.

The strongest selling point for Steelwrist products is their installation. I am very impressed with the attention to detail when fitting the attachment. The rule is that the machine should be cleaner after they have finished their work than it was when they started. The work is so meticulous that they even spray air freshener into the cab when they are finished, so the first smells the operators get when they open the door is a nice one. It’s all about first impressions. The operator is shelling out the cost of an Aston Martin when buying a digger. You would not be very happy if Aston Martin decided it would be a good idea to hold the radio in with gaffer tape! Pat and his team at Steelwrist have the same approach, that is why they get go the extra mile to ensure the fit out is to a very high standard.

“I also believe in building personal relationships with my customers,” adds Pat. “I bring a goodie box to operators who are buying a Steelwrist for the first time. It’s these small touches that are remembered. They are investing a lot of money with my business and I really appreciate it.”

To me it is obvious that the policy is working well. On the job everyone knows Pat and he likes to engage in a bit of banter. He is very much a hands-on operator and delivers service with a smile.