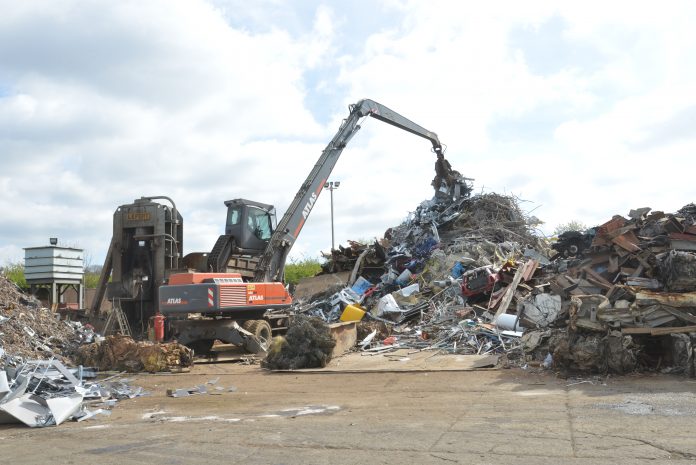 The Atlas name has been in the UK since the early 1960s with early adopters of what was seen as very expensive machinery benefiting from increased productivity and safety over the more commonly used rope cranes.

One of the UK’s earliest Atlas customers, and still one to this day, are the Leeman brothers from Essex. The brothers currently run one of the largest recycling concerns in the county, Benfleet Scrap and operate nine Atlas machines of which five are the Atlas 350MH.

While the Leeman family has prospered from the growing trends for recycling metals, their original methods of handling material are far removed from how the company operates in the present day. Horse drawn carts and the hand-balling of tonnes of material was replaced by rope cranes and four wheeled tipper trucks; a huge step forward in increasing productivity. Move on to the early 1970s when some yards in the UK were moving to British machinery from Hymac and JCB as well as the French made Poclain 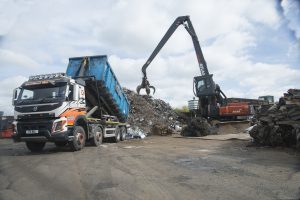 The late 1960s had seen the company purchase an old brickwork site in Low Street, Tilbury where the company knocked the old works down to create what was then a large and modern metal recycling facility. Still using rope cranes to tranship material, Percy Leeman invested in an Atlas AB1702 wheeled material handler from the local dealer, Thomas Ward. While many questioned the huge investment in an untried German machine, the increase in capacity, safety and driver comfort soon gave the doubters an answer. Although the company were now able to handle a larger amount of material in the yard, site handling was still being carried out with rope cranes. Seeing the future for the company as a recycler rather than going out to site to dismantle structures and all the associated pitfalls which came with this job, Percy’s son Tony quickly invested in further recycling advances such as some of the first crushing and baling and fragging plants to come to the UK. Tony’s foresight into streamlining the company activities was instrumental in placing the company on the path to where we find them today. 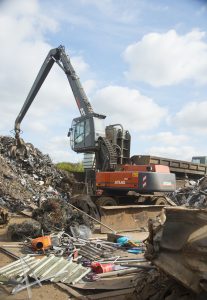 Within a couple of year’s, the company were running 6 Atlas machines at the East Tilbury depot with one as a spare. To this day, the Leeman brothers (Richard and Anthony) maintain the fact that they can only be making money if the material is being put through the recycling process. “If it is just dumped on the yard, it’s worthless to us.” This means the reliability and productivity of the machines is key to the prosperity of the company. “We could purchase other brands and have had the opportunity over the years to do that” explains Anthony “We know what we get from an Atlas machine. We know we are buying reliability and superior build quality and whilst that is very important to us, we also know we are getting a first class service and back-up from the dealer. That makes a huge difference to us. Everyone has issues no matter how large or small it is and the difference is always made by the response and professionalism shown at dealer level. This is something we cannot fault at TDL.”

The late 70s and 80s saw the Leeman family expand their interests in metal recycling with the addition of further yards around the London and Essex areas culminating in the Benfleet Scrap business they own today. 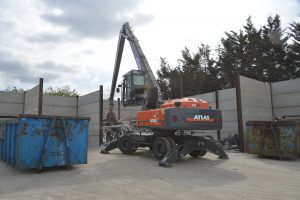 While the brothers are Atlas’ longest serving customers in the UK, Anthony explains that it hasn’t all been plain sailing; “We have had our issues with the product and dealers over the years but, at the end of the day, they have stood by us and backed the product to the hilt. We cannot believe there is a manufacturer out there that doesn’t have issues with any of their machines. It’s how they look after them and their customers is a major point. Atlas and now TDL have been great to deal with. We do have our arguments occasionally, but we cannot fault them for their customer service and especially their back-up. As for the Atlas product, we think they make the best material handlers around. We wouldn’t have been buying them for the last 40 or so years if we didn’t think that!”

The latest Atlas machine to join the fleet is a Tier 4 Final 350MH Blue. Powered by a modern and fuel efficient Deutz 6.1l diesel, the 36t crane has been purchased for the Benfleet depot where a series of expansion and modernisation of the site will see capacity increase over the next few months.

The site is also home to a pair of older 350MH models and despite the amount of work undertaken by both machines, the condition their operators keep them in is testament to the way the whole fleet is turned out. “We take great pride in the way our trucks look and this pride runs through to the machines we operate in the yard.” explains Leo Leeman, Ops Manager at the Benfleet depot.

The newest 350MH is a far cry from the AB1702 the company first purchased. Independent stabiliser legs with swivelling pads allow the machine to be kept level and steady at all working radii, smooth electro over hydraulic controls and one of the most efficient and clean engines available in this type of vehicle.

The first machines the company purchased were derived from wheeled excavators complete with two-piece booms. As the years progressed, later models such as the 1602, came fitted with bespoke material handling equipment and fixed riser cabs. Whilst these machines were seen as far superior to some of their British and French counterparts at the time, the new models are even further removed again and more akin to operating a modern car. 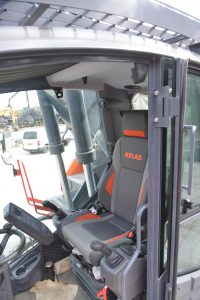 Access to the elevating cab is now safer and easier thanks to well placed non-slip steps and grab handles and once in the cab, all the controls fall easily to hand. A comfortable high backed seat, climate control and fully adjustable joysticks make for an environment any operator won’t mind spending a shift in. Impact resistant glass and a full cab guarding offer excellent operator protection and the smoothness of the electro-hydraulic control system means smoother loading and unloading of vehicles. Fitted with a dedicated 18.2m material handling configuration allows the operators to work in a far greater working zone, reducing the amount of times the machine needs to be moved during a shift. This latest model Atlas 350MH offers increased lifting capacity and faster cycle times and is capable of comfortably operating with a 700 litre E761 Atlas grab delivering enhanced productivity.

Early orange peel grabs were found to be wearing out too quickly for the brother’s liking. Additional hard-facing and protection strips were added which was eventually taken up by Atlas and added to their new grabs. “The grabs we are using today are ideal for the work we do. We do have to look after them but the build quality is far better these days.’ Commented Anthony.

Whilst still retaining a sentimental thought for the older machines, Anthony believes the new Atlas handlers are the best on the market. Offering a combination of high productivity, operator comfort and economical operation, the 350MH is far exceeding the company’s already high expectations.