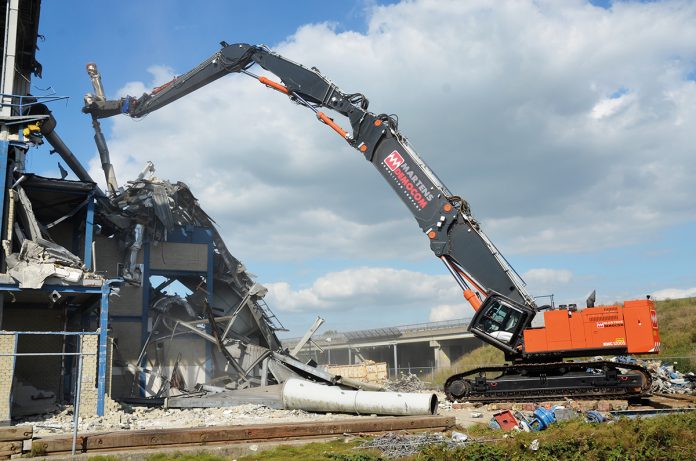 Imagine taking an 85-tonne Hitachi ZX890-6 and transforming it into a 170-tonne demolisher. Such a machine exists, as Steven Vale discovers.

CALLED the KMC 1200S, the monster wrecker which thrilled the crowds as a world premiere at last year’s BAUMA is the result of joint development work between KTEG (subsidiary of German Hitachi importer Kiesel) and Hitachi.

Bought by Belgian demolition company Martens Democom, after leaving the German show, the press swarmed over the KMC (KTEG Multi Carrier) 1200S at its first job to demolish a redundant grain silo complex in the Grand Duchy of Luxembourg.

With this job completed, and the paparazzi’s interest waning, seven trucks moved the excavator, which by now was dubbed by some as the Demolition Dragon, and by its owner as the Red Dragon, to Belgium to topple a second building in the town of Genk.
It remained in the country for its third job to take down a hospital in the heart of the Belgian town of Leuven, which is where we caught up with it.

Supplied by Belgian Hitachi importer Luyckx, the ZX890 continues to take its power from the standard 520hp/382kW six-pot Isuzu engine, but the bespoke undercarriage and demolition booms were fabricated under KTEC supervision by Dutch engineering company STC.
As well as several Triple Articulated Boom (TAB) configurations, the 1200S also has a 51m high-reach demolition arm, and we timed our first visit to see the six pinned sections stretched to full height.

Comprising a 24.5m main boom, 11.5m two-piece mid-arm and 14.0m main stick, the 890’s standard 850kg main lift cylinders were no match for the bespoke boom.
Initially, the plan was to order a pair of custom-made main versions, but in the end, it was decided to use as many standard off-the-shelf components during the modifications as possible.

Not having a quick-change system at top saves weight and allows a bigger tool to be fitted. At the top, the weight of the 2.5-tonne Epiroc 2500R increases to the maximum 3.0t with adaptor plate.

With the attachment lowered to the ground, the lunch break provided an opportunity to chat with seasoned operator Peter Severijns. It also allowed us to take a closer look at the excavator, which has all the usual trimmings associated with a high-reach machine, such as a tilting cab, extra guarding and a dust suppression system.

I could not help but notice the slew ring. The heavier boom meant that the 890’s standard version was replaced by something quite a bit stronger. The precise details of the bespoke arrangement are off-limits, but considering the size of the main lift rams, it is clearly much stronger than the standard one.