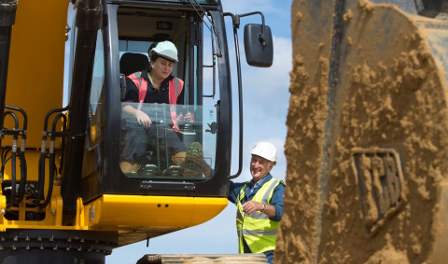 The Construction Industry Training Board is leaving its historic home in remote Bircham Newton, quitting training delivery and outsourcing back office functions.

CITB chief executive Sarah Beale said the restructuring of the organisation would create “the strategic, forward-looking and agile skills body that the industry is seeking”. In effect, CITB will exist simply to collect and redistribute levy money.

Mark Kennedy from the NFPEO said “This effectively will privatise the CITB, I am not sure this is perfect timing considering the great need for equipment operators in the industry and the lack of training providers.” The positives could be that the industry will have to pull together and look at training in a different way rather than rely on the CITB, and hopfully more centres will pop up or training facilities on major projects will become more important.  It does however bring up more questions with regard to CITB’s role within the industry moving forward.”

Plans for reforming the Construction Industry Training Board are contained in the document Vision 2020: The Future CITB. Its publication follows the government’s industry training boards (ITB) review and the triennial consensus process. While construction voted in favour of continuing the industry levy, it also revealed widespread dissatisfaction with the performance of the CITB and called for significant reform.

Vision 2020: The Future CITB is a three-year plan to slim down the organisation, turning it into ‘a commissioner of outcomes’. CITB will no longer deliver training itself except where it is unavailable on the market, or not good enough. The National Construction College at Bircham Newton in rural Norfolk faces sale or closure.

It seems that the card schemes CITB runs, Construction Skills Certification Scheme and the Construction Plant Competency
Scheme, will now be privatised. Which is fine as long as there is a regulator to manage these or we could go back to the bad old days of unscrupulous organsisations handing out accreditations like candy.

The proposal looks at a move away from Bircham Newton, with Peterborough earmarked as the likely new base. In addition, there will be small co-located offices in London, Scotland and Wales. Around two-thirds of the workforce will remain mobile.

The plans include the outsourcing of internal corporate support functions and customer operations; the proposal is to outsource these by the end of 2018.

Sarah Beale, CITB CEO said: “Construction needs to
modernise and CITB is no exception. We accept the challenges laid down by industry and government and we will deliver a future-fit training body by adapting and updating our business model.

“Some really tough decisions could be made under these proposals but I’m confident in our commitment to becoming a
more representative, accountable and reliable ‘levy in, skills out’ organisation. We now have a clearly defined path, and we see a bright future for a modern, engaged CITB.”

She added: “I understand this strategy will bring about big changes to employees at CITB and we will be supporting our colleagues as much as possible throughout this process. These are tough calls to make, but needed if we are to meet the future demands and make the greatest impact to construction.  We have worked hard to develop robust, well thought-out plans which meet our industry’s needs whilst building a solid foundation for CITB’s future. The proposals outlined today will be phased in over the next three years, and with our customers always in mind it’s business as usual.”

CITB currently has approximately 2,000 staff, including 600 at Bircham Newton. Unions say that hundreds of these jobs are now at risk.
Unite national officer for construction Jerry Swain said: “These plans are a hammer blow for the construction industry and for the workers at the CITB. Thousands of construction workers owe their careers and their livelihoods to the unique training they have received at Bircham Newton. There are grave doubts if any private provider could or would provide the same level of training at the same cost, which is currently provided at this unique facility. It appears that the ‘reforms’ being proposed by the CITB are all about increasing profits for individuals and companies and not what is in the best interests of the construction industry.”

Mark Robinson of UNITE said ‘’The likelihood of finding a training provider willing and capable to take on the National Constr
uction College function of the Bircham Newton site and other NCC sites across the country is difficult to ascertain and puts hundreds of jobs at serious risk.

“Unite believes it is totally unnecessary to go to this level of change. For the CITB not to provide their own training on behalf of industry leaves the market wide open for less capable and reputable organisations to drive down the quality and standards that the industry expects.

“Unite will be seeking the views of its members to see what action can be taken to defend the hundreds of jobs not only in West Norfolk but throughout the country.”

UK Plant Operators will keep you updated, but this could be a positive for the staff and the equipment operators in the industry if it brings more training facilities at competitive rates. The skill set within CITB is still needed and the quality of their training is of a high caliber so they might have a new badge to work under but if the industry comes together it could be a positive step.