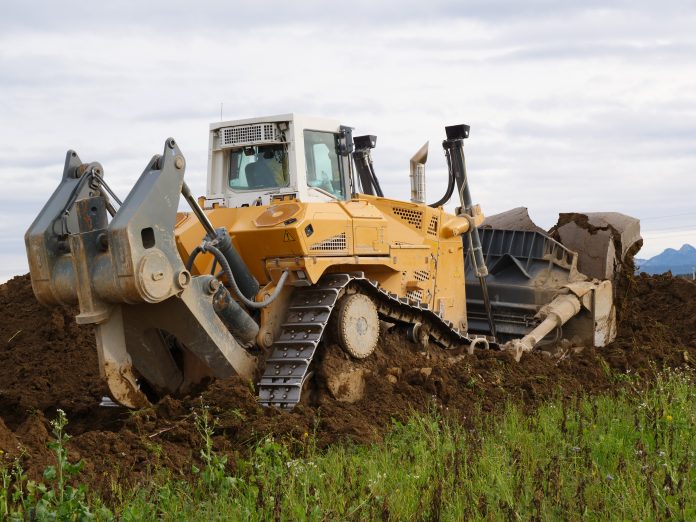 Leaked images of Liebherr’s PR776 started to circulate online late 2015. They’d done well to keep the project under wraps as these things usually have a conception to launch period of up to 10 years. Some official photos were released by Liebherr themselves in the run up to Bauma 2016 showing the PR776 being readied for transportation to the Munich tri-annual event. 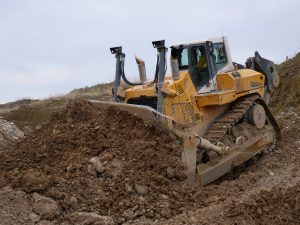 Details finally started to emerge that the PR776 would feature hydrostatic technology, making it the only bulldozer in it’s size class to feature this. Hydrostatics have always been recognised as an excellent means of power transmission.

A hydrostatic drive will typically outperform mechanical and electrical variable-speed drives and gear-type transmissions. Hydrostatics have a continuous power curve without peaks and valleys, and they can increase available torque without shifting gears. But despite the superior performance of hydrostatics, a major drawback has been it’s higher cost compared to their mechanical counterparts. Although the cost gap has been narrowing as manufacturers fine tune and perfect the technology.

My first encounter with the PR776 was during Bauma 2016 at Liebherr’s “Social media event”, which was to be the first time that a manufacturer had recognised the growing online community devoted to covering the heavy equipment market. The gleaming white PR776 looked impressive, even next to the 200 tonne R9200 excavator. I was able to take a short video standing beside the cab as the dozer was started up and the blade moved up, down and tilted. I’m not one to be satisfied with seeing a static demonstration of any piece of equipment, so my thoughts turned to the question of how I could see this very special dozer working in the field. 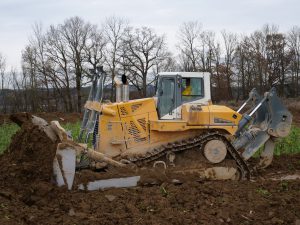 It was at Bauma that we were told of the prototype in a location that still can’t be disclosed (somewhere in Europe). I was invited to go and have a look at it, but at the time I had so many other expensive trips on the agenda, including Minexpo 2016 and Conexpo 2017, that a trip to see the prototype PR776 was just not possible.

One month ago I was informed that the prototype PR776 would finish its field testing and be moved back to the Telfs factory in Austria within 4 weeks, where it was built, I had to act.  Normally it’s too great a risk flying and driving a considerable distance at great expense during a time of year when freezing temperatures, including snow and rain could mean I came home with nothing. I’ve usually found the old saying ” Fortune favours the bold” to be true, so I booked the trip and hoped the weather Gods would look kindly on me.

I left home on Sunday, November 26th at 2:00am to catch a three hour flight at 6:50am from Dublin to Munich. After arriving another 3 hour drive awaited me. On Sunday evening the forecast did not look favourable, showing wet snow on both the Monday and Tuesday I had devoted to filming the PR776. The weather was especially a concern as I’d brought my drone with me. It can handle a stiff breeze but definitely not snow, sleet or rain. Monday morning started overcast with flurries of snow, but if it didn’t get any worse I’d be happy with the situation. 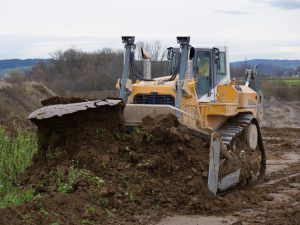 On first sight the quarry chosen as the test bed for the PR776 looks to consist of soft gravel. I was soon corrected on this observation when I asked why the 100-foot-high vertical wall didn’t collapse. Apparently this material is so hard that blasting is required. I found this out to my detriment when on the way home my drone tested positive at airport security for explosives, presumably picked up in the quarry. In the end the weather got better and better causing my padded overalls and other excessive winter clothing to become a sweat inducing burden.

The bulldozer started Monday morning on the quarry floor pushing material towards a crusher and conveyor system that is loaded by a large wheel loader. After 30 minutes of that it was time to head up top to rip and push material over the edge. The material that the PR776 was dealing with seemed to be a glacially compressed sediment, that although soft looking to the eye, was actually as hard as rock. The higher than usual high wall in the quarry and large overhangs demonstrated that the geology here was no pushover. The bulldozer got straight to work pushing material from the upper level towards the crusher at the the lower level with it’s 18 cubic metre blade. When this previously loose gravel was exhausted it was time to see the dozer’s single shank ripper in action, which according to the operator out performed the Cat D10T he had previously been in.

The ripper struggled to find a gap in between boulders, but inevitably found a weak spot, bringing up what looked like chunks of glued together gravel. 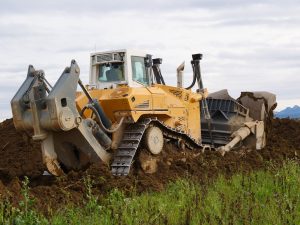 On Tuesday a much more pleasant situation presented itself, both to myself and the dozer operator.  A large field of topsoil was to be stripped in preparation for the 7 metres of clay beneath to be removed at a later date to expose the iron hard gravel bed below. I had only planned to spend a couple of hours filming the dozer on the second day to supplement the excellent footage I’d managed to shoot the previous day, but my easy day turned in to a long hard one, not being able to walk away from a heavy equipment YouTubers Heaven! The PR776 had to first make itself a ramp up to the top elevation of the quarry by cutting a steep ramp up hill in soft clay. Once on top, the dozer started to strip the topsoil in long pushes to the perimeters of the field. This presented the perfect situation for my drone. With the level ground and long pushes, I was able to match the bulldozers speed and keep close to it. This allowed me to shoot some fantastic footage from the front, back and sides of wet topsoil rolling smoothly off the blade.

So far feedback on the PR776 seems to be very positive with the only gripe usually being that the elevated sprocket design is copying Caterpillar. Personally I think it was a brave move on Liebherr’s part.  They wanted to give their customers the most reliable track system. It would have been easy to have just stuck with the traditional undercarriage configuration.  I’ve spoken to operators and mechanics who have worked on the dozer over the past year or so. They’ve remarked that’s it’s smoother and quicker than its closest rivals, and as I’d previously mentioned, ripped better. It also burns an average of 20 percent less fuel than other dozers in it’s size class, which is an incredible fuel saving over a machines lifespan.  A mechanic had remarked that although looking like a Cat, the Liebherr was actually a very different machine underneath.  Hopefully my trip to film the PR776 prototype won’t be the last encounter with this groundbreaking dozer.