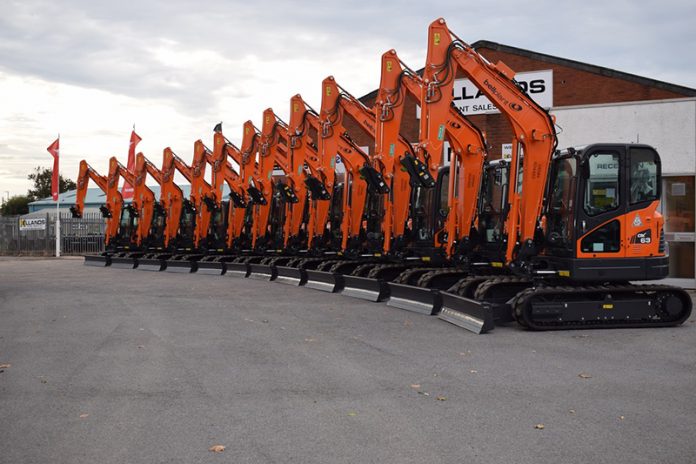 Bell Plant Ltd, part of the Gloucestershire-based K W Bell Group, has taken delivery of 12 new 6 tonne Doosan mini-excavators, supplied by Kellands (Plant Sales) Ltd, based in Bridgwater in Somerset, the Authorised Doosan Dealer for London and the South of England including the Channel Islands. These are the latest Doosan machines to arrive at Bell Plant from Kellands in a close relationship that began 20 years ago in 1999, when the first Solar 55 mini-excavator was purchased by Bell Plant.

Peter Bell, a Director at K W Bell Group, commented: “Bell Plant generally changes its machines every three to four years. The last 20 years have shown us that there are two key reasons why the relationship with Kellands/Doosan has grown from strength to strength over that time. The first is the Doosan brand itself – the quality, the performance of the machines and their residual value; the second is the continuously excellent service and back-up provided by the team at Kellands.”

Part of the current fleet renewal programme, the new Doosan order comprises seven DX63-3 conventional tail swing and five DX62R-3 reduced tail swing mini-excavators, in a deal worth around £0.5 million. These are the latest Stage V versions of both machines, powered by the same Yanmar 4TNV98C diesel engine, providing 44.3 kW (59.4 HP) of engine power at 2100 rpm, a massive 22% increase over the previous generation models.

Enhanced Hydraulic Performance
As well as the huge increase in engine power, another of the stand-out features on the new 6 tonne excavators is the hydraulic performance, with a maximum flow rate of 132 l/min. The hydraulic system incorporates a load sensing system which guarantees high hydraulic performance and allows smooth and efficient combined operations.

Each machine has been supplied with a fully automatic Geith hydraulic quick coupler and a full set of Geith 300, 450, 600 and 900 mm buckets and a grader/rehandling bucket.

Peter Bell added: “The smooth operation offered by the new mini-excavators have been very well received by our drivers. The Doosan machines offer us consistency, reliability and versatility, combining their compact design for negotiating tight spaces, with the ability to cover all the applications such as digging foundations, service trenches and loading lorries that you would expect to complete with much bigger 13-14 tonne excavators.”

In fact, the space available in the ROPS operator cabs on the DX62R-3 and DX63-3 mini-excavators is similar to that found on much larger medium and heavy-duty machines. The cabs have a large entrance and exit, ensuring it is easy to get in and out of the machines.

A high capacity heating and air conditioning system is standard, with fully adjustable vents installed at both the front and rear of the operator’s seat to maximise efficiency. The interior of the cabs has been ergonomically designed to optimise operator comfort and features an ample foot rest area and an additional cup holder, and the openness of the cabs provides a wide field of view and excellent all-round visibility. The cab lighting, sun visor and side mirror all contribute to a safe and pleasant working environment for the operator.

Three Operating Companies in K W Bell Group
Along with Bell Contracting Limited and Bell Homes Ltd, Bell Plant is one of three operating companies in the K W Bell Group. Bell Plant is the Group’s plant hire company supplying a wide range of plant for use by Bell Contracting on construction sites throughout South Wales and the South West and Midlands regions of England. The company’s fleet includes excavators, dumpers, forklifts, rollers and scaffolding, with a total asset value just short of £4 million.

Bell Contracting was formed in 1993 and provides contracting works to major housing developers – the company works for six to seven of the top 10 developers in the country. It provides groundwork, bricklaying and scaffolding services. With a skilled workforce of over 400 employees, Bell Contracting is well set up to work on all types of project including multi-million pound contracts. Currently, the company is working on 40 to 50 sites in Gloucestershire, Worcestershire, Herefordshire and South Wales.

Bell Contracting also works on behalf of Bell Homes, the group’s standalone Housing Development Division, which over the last 20 years has successfully constructed over 800 homes in South West England and South Wales. The range of properties that are available is considerable, from two bedroom starter homes to luxury five bedroom executive residences; all are constructed to the highest standard.

Doosan Dealer For Over 30 Years
Kellands (Plant Sales) Ltd has been a Doosan dealer since 1987. Today the company is the Authorised Dealer for London and the South of England including the Channel Islands, for the Doosan range of crawler, wheeled and mini/midi excavators, wheel loaders and articulated dump trucks.