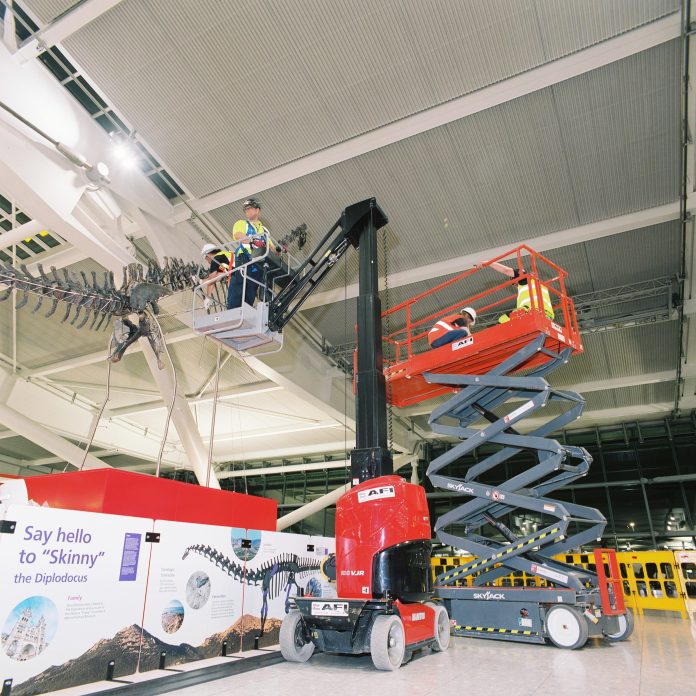 The major project team from AFI group of companies, one of the UK’s leading powered access specialists, has been busy this spring with the successful installation of a 13-metre 155m year-old dinosaur skeleton, which towered over the check-in at Heathrow Terminal 5.

It was assembled over two nights and was on show at the airport for two months, until June, when it was dismantled and returned to France to be sold by Auction. The Auction house Aguttes expect the enormous fossil to fetch £2 million. ‘Skinny’ as he is named, is a cousin of the diplodocus and is still to be given a scientific name. He’s 13 metres long, 8 metres high (with his base) and he has around 90% of his original bones. 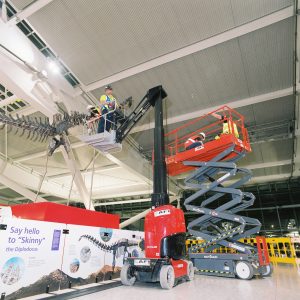 Incredible time-lapse footage taken of the skeleton’s installation, shows the AFI MEWPs coming in and out to enable the specialist crews to painstakingly assemble the skeleton bone by bone over two nights. AFI’s major projects team stepped up with their knowledge of the way Heathrow operates after taking an enquiry from Edge Retail, a design consultancy that specialises in the retail environment. AFI’s major projects team are well experienced in the specific policies, procedures and requirements at Heathrow, so once contact was made with the Project Manager from Edge Retail, the AFI team were immediately on hand to scope out the best access solution for this time sensitive, dramatic installation. Once the team understood the specifics of the requirement and the exact location within Terminal 5, they were able to recommend the right machines for the job. Originally a spider boom was on order for the installation project, but because of the limitations and restrictions in place across the vast airport site, diesel machines cannot be used within the terminal. In total, AFI supplied seven machines, a combination of electric scissor, mast and boom lifts.