JCB earlier this month delivered some festive cheer to thousands of UK employees – the company’s biggest Christmas bonus for more than a decade. 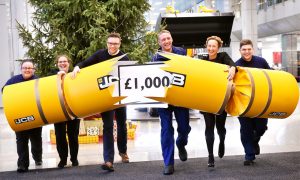 Around 7,200 employees at JCB’s 11 plants across Staffordshire, Derbyshire and Wrexham will receive an extra £1,000 in their pay packets. The last time a Christmas bonus of that magnitude was awarded was in 2007.

The record-equalling Christmas bonus comes in a year in which JCB machine production reached a 73-year high and in which an additional 1,500 people were recruited. This includes the awarding of permanent JCB contracts to around 550 agency employees.

JCB Chairman Lord Bamford said today: “JCB has had a very successful year and I am delighted that we are able to award a substantial Christmas bonus to thank our employees for their contribution. There are many parallels between JCB and the British economy at the moment: both are doing very well indeed and both have record levels of employment. What’s more, the signs remain extremely encouraging for 2019, with many reasons to remain positive for the future, both for our business, and the UK, which, after all, is the world’s fifth largest economy.”

JCB CEO Graeme Macdonald said: “JCB has had an exceptional year and we are gearing up for another strong 2019.  The whole JCB team has every reason to be proud of what has been achieved and we are looking forward to building on our success next year.”

Lydia Lyons, 36, is a Paralegal in JCB’s Legal Department.  Married with a three-year-old son, Thomas, she lives in Northwood, Stoke-on-Trent and joined JCB 18-months ago. She said: “It’s amazing to get such a big amount. It really takes the weight off your shoulders getting a bonus so close to Christmas. We’ve had loads of work done on our house recently and this will help pay those bills and mean we can enjoy Christmas without worrying about the money.”

Jake Shakeshaft , 23, of Clayton, Newcastle-under-Lyme joined JCB is a Guidant agency employee. A former singer he represented the UK at Eurovision and now works on JCB’s production line in Rocester, Staffordshire. He said: “It wasn’t something I was expecting at all so I am over the moon – it’s brilliant.  It’s an amazing amount and I’ll be using it to pay for my holiday in the Dominican Republic, in July.”

Lee Turnock, 32, from Werrington, Stoke-on-Trent works in JCB Group Transport and Logistics at JCB’s World HQ. He joined JCB at the start of the year. He said: “It’s a great reward for all the hard work we have put in through the year. I’ve never got a bonus like this before, so I don’t know what to spend it on.  I might treat myself, maybe to a holiday around Easter time.”

Kirsty Smith, 27, of Stourbridge is a Guidant agency employee and drives a forklift truck at JCB’s World HQ at Rocester. She joined JCB after working in the care sector and this is her first experience of a Christmas bonus.  She said: “I’m gobsmacked because last year we didn’t get anything so this is a really big shock. It is really nice to get some recognition for what we do. I have no idea what I’ll be spending it on because I wasn’t expecting anything, but it will be really nice as my partner and I want to move house soon, so it will definitely help with that.”

Lloyd Sims, 28, of Rocester, Staffordshire, works as a pipe welder in the HBU.  He has worked at JCB for three years, but this is his first year as a JCB employee.  He said: “I am absolutely amazed and I can’t believe the amount. We were trying to guess how much it might be and we thought between £300 and £600 but this has just blown it out of the water. “I don’t know how I’ll spend it; it could be a holiday in the New Year or I might just have a really good Christmas.”

Laura Topham, 32 of Group Purchasing started work at JCB in January this year. Married with a six-year-old daughter Mia, she lives in Shavington, near Crewe. She said: “I am really excited to get the bonus and to be honest it’s spent already as it will pay for everything I’ve bought for Christmas. Mia is having everything pink and Barbie.  This will make Christmas a lot easier.”

During 2018 JCB has also launched its brand new range of X-Series excavators to industry acclaim and began work on a new £50 million UK factory at Uttoxeter, Staffordshire to build cabs for its machines.  JCB also unveiled its first electric digger – a 1.8 tonne mini excavator which can be charged by plugging it into a 230 volt domestic supply.

Solid performance in the second quarter for Volvo Construction Equipment

Solid performance in the second quarter for Volvo Construction Equipment 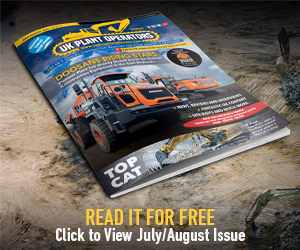