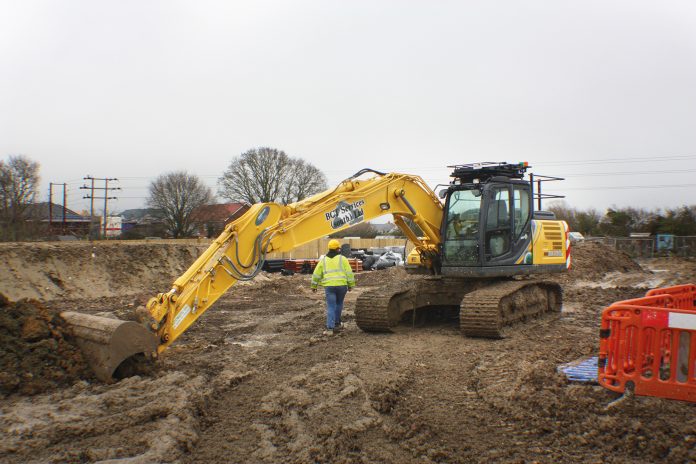 On site in rural Sussex experienced freelance operator Nigel Williams is enjoying getting to grips with a brand new Kobelco SK180LC excavator. Matt Bailey got to see him just before the lock down kicked in.

Like many other parts of the country, the area between Chichester and Brighton on the south coast has been earmarked for housing development with over 10,000 new homes currently planned for the region. And even under grey skies and up to our knees in mud in early March you can understand why the area is so attractive. It’s often an easy commute into the capital; it’s near the sea and the South Downs for those wishing for fresh air and rural charm; and if you want to venture into town you have Chichester, Brighton & Hove and Portsmouth close at hand. A great place to live in which there had been until recently very little new house building.

All that has changed however and now house builders are breaking ground on sites all over the region. The village of Yapton can be found between the picturesque castle town of Arundel and the seaside resort of Bognor Regis. The village is the site of a number of new developments and at one I met experienced operator Nigel Williams. Nigel is a sole trading freelance operator who is currently working for BCT Groundworks behind the controls of the company’s latest acquisition, a 20 tonne Kobelco SK180LC excavator. 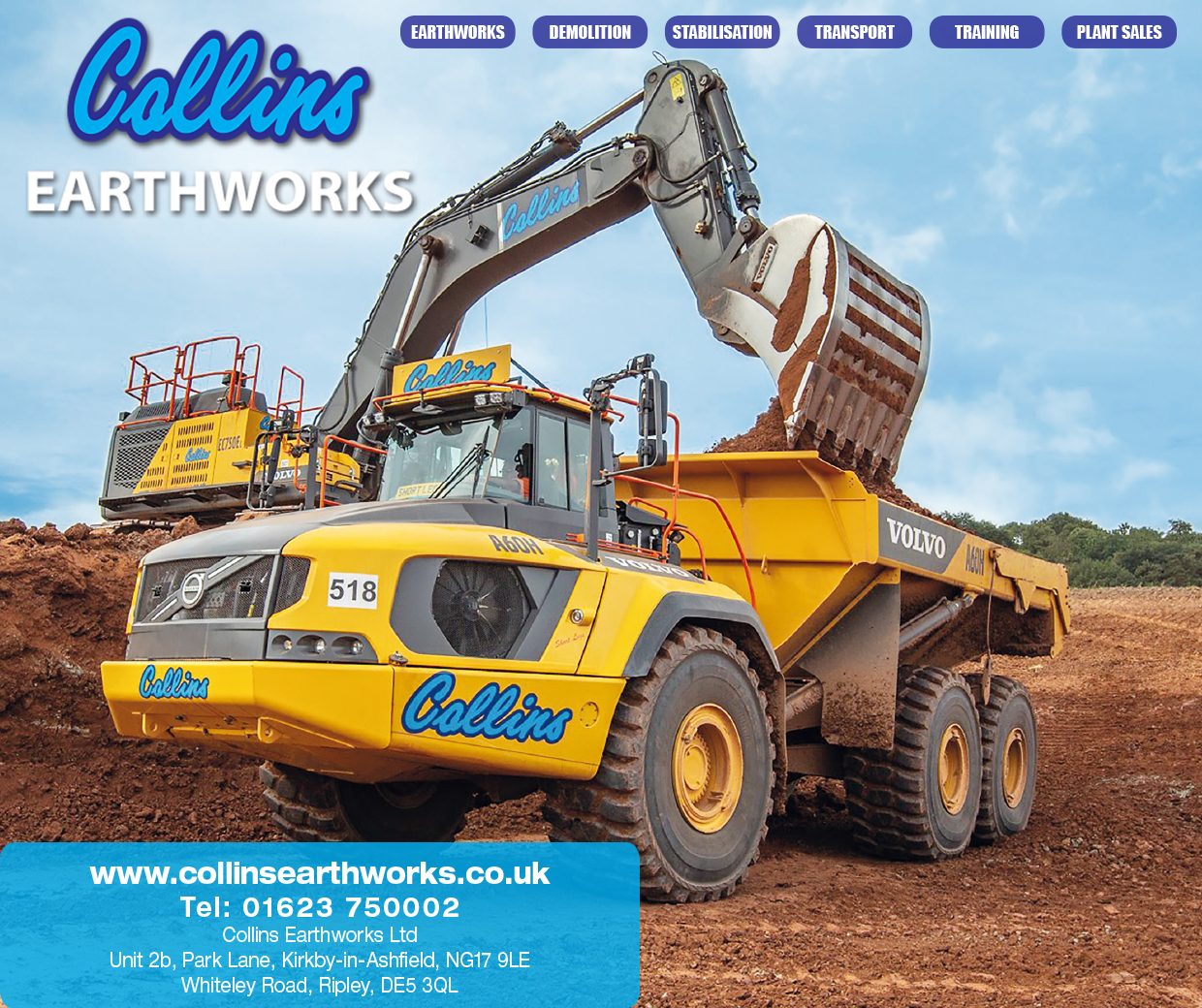 Yellow Kobelco?
At first I found the Kobelco machine hard to pick out amongst the Volvos and Hitachis on site but Nigel quickly explained the confusion. “It’s in the Kobelco North American yellow colour rather than the typical Kobelco blue,” he says. “BCT specify all their Kobelcos in the yellow finish.”

Nigel has more than 20 years experience as an operator. He hails from the east of England and originally wanted to be a North Sea trawler man but with the decline of the fisheries industry he attended agricultural college and got into the construction industry from there. Over his career he has worked for many different organisations and he reckons he’s operated all the main brands of machine at one time or another. “I have driven them all,” he confirms, “and Kobelcos are up there with the best of them. This SK180LC does everything you ask of it without breaking a sweat. It is very well built, a great machine for bulk excavation and I’m currently working on the groundworks for attenuation tanks, but it can tackle any task. It does everything well really.”

Kobelcos are known for their fuel economy – ‘We save you fuel’ is the company tagline – and Nigel is impressed with how little the SK180LC drinks, “The fuel economy is good,” he confirms, “and it also goes very easy on the AdBlue as well.”
The SK180LC was supplied by UK Kobelco dealership Molson and Nigel is very impressed with their after-sales performance. “Their service has been phenomenal,” he says. “Second to none, but the machines are very dependable and solidly built. We have very little trouble with them.”
Like all operators Nigel spends most of his time in the cab so a pleasant and comfortable work environment is a minimum requirement. “The cab is spacious and comfortable with everything exactly where you would expect to find it and a very high level of fixtures and fittings,” says Nigel. “It has great all round visibility and is very quiet with very little vibration.”

The client
Nigel is currently working for BCT Groundworks. The company was founded in 2010 by Brian Turner and has evolved from a groundwork management consultancy to a complete service provider, delivering groundworks and civil engineering. Based near Southampton in Hampshire, BCT covers residential, commercial, education and health care sectors along the south coast and Home Counties. With the rapid growth in house building in the area BCT has doubled in size in the last 18 months

“Many of the projects we deliver are complicated and time sensitive. BCT has a reliable reputation across clients and suppliers due to our quality and punctuality from awarding through to completion. We are focused on providing a first-class competitive service, with the highest level of customer satisfaction; ensuring we’ll exceed your expectations,” the company says. “Health and safety is part of everything we do at BCT. This has been recognised externally by the health and safety awards we have won and through client feedback.”
The company’s plant fleet includes Volvo, Kobelco and Hitachi machines. But the Volvos are in the process of being phased out in favour of Kobelco and Hitachi machines. “Kobelcos for everything above 20 tonnes and Hitachis for everything below,” says Nigel.

A closer look at the SK180LC
In the conditions we are faced with on site it is difficult to really make out anything to do with the tracks and undercarriage. Nigel shovels the mud off the tracks and steps to allow access to the cab, engine and hydraulics. One thing is clear despite the mud, the SK180LC, while it is certainly compact for a 20 tonner, is a solid and well-constructed machine with a spacious cab.

The robust construction is evident in the forged and cast components that are used throughout the machine. The underside of the arm is reinforced with a rock guard to prevent damage and there are track guides to help prevent the crawlers from coming off the rollers.
According to Kobelco the SK180LC conforms to Stage IV Exhaust Emission Standards, thanks to its significantly reduced NOx emissions. Hino engines are renowned for fuel efficiency and environmental performance and Kobelco says it has tuned the 100 kW Hino J05EUM-KSST power plant on board especially for the construction sector. “The pressure within the common rail fuel injection system, the VG turbo, and the exhaust gas after-treatment system reduce exhaust particulate matter while the large-capacity EGR cooler sharply reduces the formation of NOx gases.”

The company says the variable-geometry turbocharger adjusts air intake to maximize combustion efficiency. At low engine speeds the nozzles are closed, the turbo speed increased and air intake is boosted. This helps lower fuel consumption.
The engine exhaust system has an SCR (selective catalytic reduction) system that converts NOx emissions into harmless nitrogen and water. Combining this with a post-exhaust gas treatment system that captures and disposes of particulates, gives the SK180LC a much cleaner exhaust that meets Stage IV exhaust emission standards.

The SK180LC features an expanded cab that provides plenty of room for a large door giving more headroom and smoother entry and exit. The visibility is improved with cameras to the rear and on the right of the excavator and a large rear view mirror on the left.
The cab has fixtures fitted as standard including full Bluetooth radio, that allows connection of smartphones and other devices as well as 12v and USB connector sockets, plenty of storage and a large cup holder for that morning coffee fix.
The ROPS cab clears ISO standards (ISO-12117-2: 2008) comes with a top guard fitted as standard and ensures greater safety for the operator should the machine tip over.