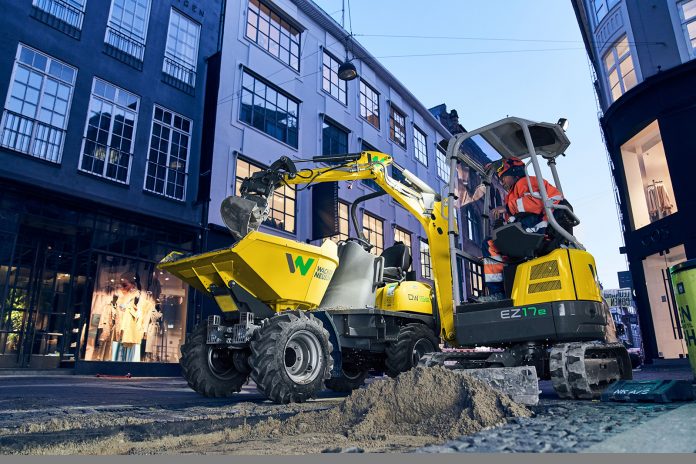 At the end of 2019, especially low-noise construction machines and units were needed for a night job site in Copenhagen’s pedestrian zone. When new cables were laid, nearly all the zero-emission family by Wacker Neuson was used: from the battery-powered vibratory rammer to the electric wheel loader all the way to the EZ17e mini excavator.

The city of Copenhagen’s noise measurements recorded no noise emissions of any kind produced by the zero emission products. “Five years ago, we introduced a world’s first with our battery-powered rammer and, since then, have kept expanding our portfolio of emission-free machines, which now includes 13 products in total for the construction industry”, says Alexander Greschner, CSO of the Wacker Neuson Group.

First, the paving stones were broken up with the fully electric zero tail excavator EZ17e; then, the soil was excavated. The excavated material was transported away using the DW15e electric wheel dumper. Moreover, the wheel loader WL20e was used for material transport on the construction site. After the cables were laid, the ground was compacted with a battery-powered vibratory rammer and a vibratory plate.