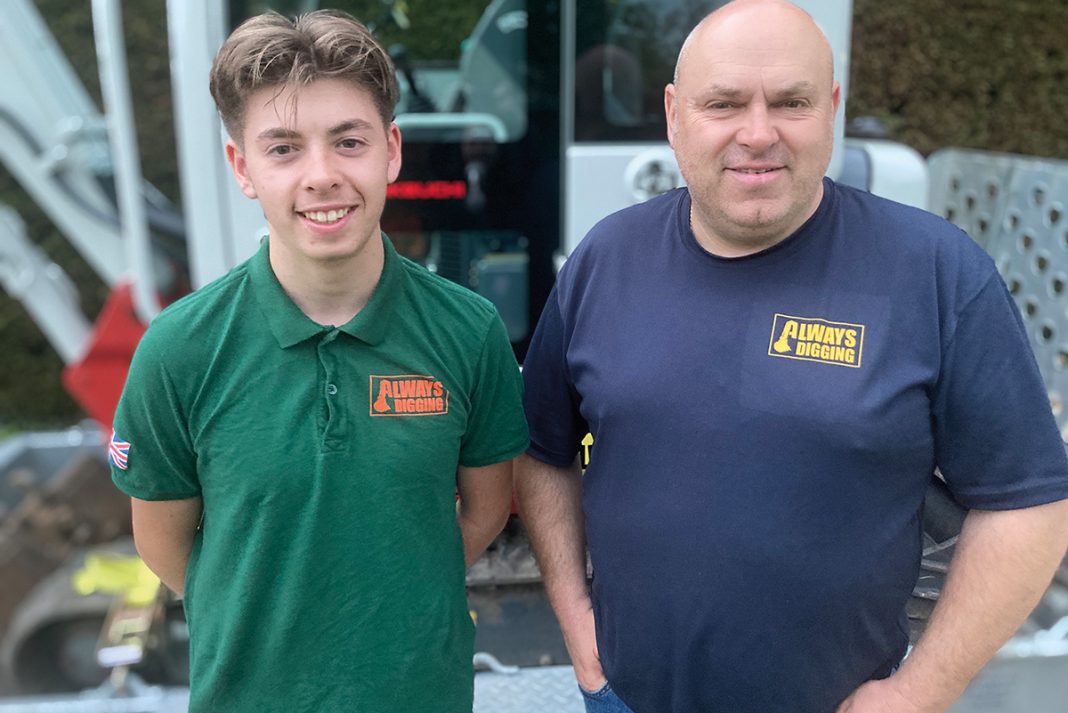 Neil Grainger started his company Always Digging in 2011 establishing prior to that, a reputation in and around the Surrey area, for over 25 years for a man and a machine, creating driveway and patios and subcontracting for groundworkers and local contractors.

How has the market been for the compact plant operator?

I was interested in this field, to see how lockdown had impacted trade and what the consequence of the pandemic, war in Europe and the cost-of-living squeeze has had on his business.

Neil said, “During the first lockdown we shut up shop the same as everyone I suppose, the call for domestic work initially dried up. This did lead however to a call to go to work on a couple of new builds, just a few of us on site all working within the rules and following social distancing”.

“Once everything started to open up, it became very clear, very quickly, that people were looking to spend on their property as foreign holidays were not an option. So we had, until the last few months, a good trading period. It has to be said that since March we have seen a number of cancelations and enquires have slowed down”.

Who is in the business and what’s in the fleet?

“Always digging is me and my son John. I own three machines a Bobcat micro-1.5-tonne and two Takeuchi mini’s a TB216 & TB219”.
John has just turned 16 years old and he has got all the certs he can for his age. He has always been digger mad; I remember first introducing him to a mini ex when he was still in nappies and he used to sit on the washer bottle all day. As he got older, whenever I could, I would take him to jobs with me, he would love to spend the day on site. He is machinery mad in general, brought up on a machine the same as I was with my father who was a demolition man”.

What are your favourite machines?

“It’s Takeuchi hands down for me they are easily my favourite machine if I had to pick one compact machine in the 1.5-2T weight it would be the Takeuchi TB219. Over the last 20 years I’ve built a long standing and successful relationship with Takeuchi. I always try to specify and recommend the business whenever I can”.

What role does technology and attachments play in your business?

“Yes, we would be lost without our range of attachments. We have a few breakers and a grapple which satisfy the majority of our needs. We have been using a Tiltrotator on a number of projects this last year or so. The training and learning was interesting but we both get on really well with that, it helps us to get jobs done as well if not better in half the time”.

“As regards technology, I am bit old school so I leave all of that to John who learns and adapts really quickly, however I am pleased to say that on foundations I do use a self-levelling laser all the time. I agree and can see it is very much the future and that the business will be safe in John’s hands when I hang up my hard hat”.

How do you feel when you think about the future?

“I am really confident about the future – it looks to me, as though the right people are coming in. It is still hard for the youngsters to break into the industry, some are born into it, but I realise this won’t be enough to sustain the future.”

“There is much more noise around the problem and the big hirers and fleet owners look like they have a plan to grow their own so to speak. I can also see more schools and colleges talking about construction as a career with more courses being offered to train and develop new talent.”

“As for my aspiration for John – I would like it if he took the business over at some point. He needs to gain a lot of experience as well as operating experience but that will happen as it happened to us all. We will eventually ‘swap roles’ and I will no doubt drive for him. There still life in the old dog yet though I have no intention to give up just yet…I’m always digging”.

Whats the best thing about being a plant operator?

“It has been hard work but doing the job I do has given me the flexibility of being self-employed, long hours some weeks but still a degree of flexibility. The customer base I have built up over the years have become friends and the social aspect is as much about the business as the business is”.