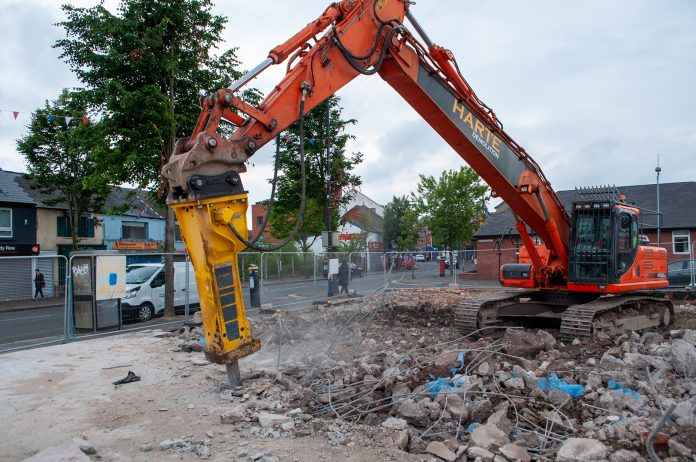 From site clearance and hazardous waste removal to complete strip outs and building demolition, Omagh based Harte Demolition Ltd has successfully planned and completed demolition projects across Northern Ireland for more than 20 years.

Having first used an SB 102 hydraulic breaker on their Brokk demolition robot, they were so impressed with the power of the breaker that they purchased an SB 152 from WAC McCandless (Engineers) Ltd, the local Epiroc dealer. Now they have gone on to invest further in Epiroc heavy breakers and selector grabs.

Harte Demolition owner, Connor Harte said “We have used a range of breakers from different manufacturers over the years, but Epiroc’s small and heavy breakers have stood out for both their speed and reliability, compared to the others we have in the yard.”

“I was extremely impressed by the professionalism and level of service provided by the team at WAC.” continued Mr Harte “From selecting and ordering the breaker and grab, through to having them commissioned on site, the whole process has been simple and easy.”

Operator Paul McCarney has been using an Epiroc HB 2000 on Harte’s recent demolition of an old factory in Belfast. Paul said “We’ve been using the breaker to remove reinforced concrete flooring and shuttered walls, as well as removing a tank, and Epiroc’s Intelligent Protection System (IPS), which is standard on the HB 2000, has proved particularly effective and makes my job a lot easier! I’ve been really impressed with the operating speed of both the HB 2000 and the MG 1500 multi grapple.”.

The HB 2000 delivered to Harte’s included Epiroc’s patented Intelligent Protection System (IPS) which simplifies the breaking process by automatically adapting the breaker’s operating behaviour to any working condition. Uptime is higher since, with its fully automated functionality, IPS requires no operator intervention or reaction and the working process is not interrupted.

The system permits more accurate and significantly faster positioning of the breaker, thanks to the centreing effect, and avoids blank firing that often results in tool damage. This also eliminates mechanical strain on the carrier and the life of all wear components is extended. The physical load on the operator is minimised as well.