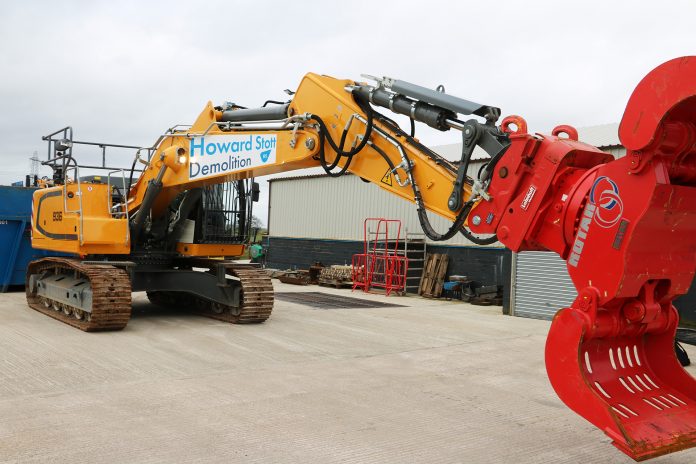 Howard Stott demolition is a company that believes if a job is worth doing, it is worth doing right. They have a place for everything and everything in its place. Darren Scully talks to its founder.

They say in life you only get one chance to make an impression. When I drove into the offices and yard of Howard Stott demolition, straightaway I knew this was a company that was run to a very high standard. The offices were something that many a fortune 500 company would be happy to have. The yard was spotless with machines in pristine condition, perfectly lined up, ready to be dispatched to the next job. And behind it all was a sense of calm in a beautiful remote location in Hapton near Burnley. I parked up and made by way to reception, to be warmly greeted by operations director, Ryan Noon. That famous Lancashire hospitality extended, and I was soon sitting at his desk drinking coffee with offerings of bacon sandwiches. Sitting on the shelf behind him were many demolition awards and a cricket bat that indicated the sport he followed. The conversation flowed and we covered many subjects which included the industry today (early March) and what we could expect in the future.

Burnt out motors and winning awards

The business was founded by Howard Stott in 1977. The business currently employs over twenty people. They very much see themselves as enabling specialists, carrying out a soft strip, rip out and then asbestos removal. They will remove entire structures and process the material through their own crushers and screeners. They also provide emergency response services if a damaged building requires securing. They can also help with regard waste management and recycling for their many clients and are ready to offer a wide range of equipment through their plant hire department. They also pride themselves on their ability and expertise when it comes to working beside rail lines and have worked directly in the past with Network Rail. A big job they were involved with that demonstrated their competence and professionalism was the Echo Arena car park in Liverpool. This structure fell victim to a massive fire on New Years eve in 2017. Over 1400 cars were in the multi-storey car park at the time and temperatures reached a melting 1,000 degrees centigrade. Thankfully no one was injured during the blaze, but a massive clean-up and the removal of the building was necessary, and this is where the expertise of Howard Stott was put to the test which they passed with flying colours. “That was a really complex job. I was on site the week after the fire and it took eleven months before we got started because of the talks with all the stakeholders. It was a seven storey structure that was at great risk of collapse. We had to secure the site and work very closely with the insurers. There were still 1,400 cars inside and 1,200 of them were decimated. Some of the others were untouched, but unfortunately the only way to get them out was using a grab attached to the high reach. It was soul destroying having to remove beautiful high-end cars that had very little damage like that, but it was the only way to remove them. Overall we were very proud of that job and it was also noticed by the client as we won an award of them and we also won the new entrant award  at the World Demolition Awards in the United States for our efforts on that contract” stated Ryan. As Stott demolition are rail experts, they are very keen to get involved with the massive HS2 project. “We do a lot of railway critical type demolitions. We are investing in some new Liebherr machines to help us with other rail projects that are coming up shortly, so I think this will put us in a good position to tender for the work on HS2”, commented Ryan.

Stott is a big fan of Liebherr machines. They currently have fifteen of the German built excavators. They have gone through all the various manufacturers over the years but have only bought Liebherr in the last few years. They have also invested in Lenhoff attachments, especially quick couplers. All their machines have their own dedicated attachments, such as breakers, grabs and shears. Their warehouse is bursting at the seams with every type of attachment you could think off. This they believe gives them an edge over their competitors as they have the right kit to do the job and plenty of it. I ask Ryan why they have decided to invest with Liebherr machines. “In my opinion I think they are the best excavator out there. The quality of the build is superb. They are built very tough, and in this industry that is exactly what you require. There is a lot of brute force with them and when you are pulling concrete that is what you need. The back up service from Liebherr has been outstanding. We have an older 954 and Liebherr were out doing warranty/re-call work on the machine ten years after she was made. Some of the work they were doing wasn’t really needed but they still did it. I think that level of detail and commitment you can’t knock. Any issues we have had that were factory related or design related, they resolved at their own cost. With other manufacturers we used to get bogged down in arguments about who was responsible and who had to pay, but with Liebherr they just get the job done and take responsibility for it with no questions asked. That level of service and our good relationships with them, is why we will keep buying machines from them” said Ryan. Howard and Ryan went to visit the Liebherr factory in Colmar and were really impressed with the build process. The special builds such as the 9350 is what caught their eye. The attention to detail and even watching how they welded the booms together gave the lads a real understanding of why Liebherr has such a reputation for quality.

Wrecking balls and not going hungry

I get to sit down with the man who the company is named after. Howard Stott is a man with a very colourful background. He used to play as a drummer in a rock-band. He is a champion rifle shooter and he flies his own ex-army Gazelle helicopter. He also restores Honda motorbikes that were built in the 70’s. His attention to detail is amazing, and to him, If a job is worth doing, it is worth doing right. I ask Howard how it all began? “It is has been so long since I started it is hard to remember. I was raised in a council estate in Bacup and I was fanatical about tractors and diggers when I was a young lad. I got a job driving a tractor in the Cotswold’s and then after a few years I came home and got a job driving a JCB backhoe with a company called George Noble plant hire. I then got a job driving a Hymac 580C, two speed dipper. I then got on a Cat 951 with a direction lever. I eventually decided to go out on my own in my early twenties and I bought myself a JCB 8C and I also bought a tipper truck. I got involved in site jobs and then eventually wound up in demolition. I was asked to knock a house down with my digger and after I tore it apart, remember this was long before health and safety current standards, I thought to myself, this is great fun. It was far more exciting then building houses. It was easy then to get demolition work from the council, because there was no red tape back then. You would just turn up on site and pull the building down. I had a massive increase in business all over Lancashire, just going around knocking houses for the council. We used to use the old front doors as our hoarding and then you would burn the houses down. There was no hydraulic grabs or attachments then. The best demo machine you had was the Ruston Bucyrus 22 fitted with a wrecking ball. It was very effective at knocking tall buildings, shame they are banned now. The stuff we did back in those days you would never get away with now. Amazingly we never once had an accident, and nobody ever got hurt. Slowly and steadily we got bigger as a business and I could take on more lads. I never wanted a massive company with hundreds of employees. I always said if I could own a few machines and live a decent life I would be more than happy. I got involved in more commercial work, large buildings, factories and then I got to remove railway bridges. I have been very lucky that I have always had great people working for me, that I suppose has been the real secret to my success” said Howard. After buying so many machines over the decades I ask Howard as to why he decided to buy Liebherr. “When you look at a digger, you look at the overall cost, how is it built, will it last, and what is the resale value. Does the driver like it, what is the back-up and service like, can you put your thrust in this brand, because this is how you make your living, and if the machine is broke down then you are going to go hungry. Therefore, I went with Liebherr, because I knew it was a brand and a machine that wouldn’t let me down. They have been around a long time and they have stood the test of time” concluded Howard.

Howard Stott demolition is a proud owner of Liebherr 936 excavator. Out in his yard I took a closer look at this well-built machine. The entirely new design of the cab provides plenty of room and creates a pleasant sense of space. Cab windows in the front, the roof, and on the right are made of break-resistant two-pane safety glass. The front windscreen is a two-part design and can be completely retracted. The 7-inch high-resolution colour display can be operated as a touch-screen system.

Thanks to its high resolution, the video-style display reproduces the image from the rear area monitoring camera in the best possible quality. It comes with versatile adjustment, control, and monitoring capabilities, and is designed to be glare-free. The Liebherr engine delivers full power even at low speeds. It is equipped with direct injection, turbocharger and intercooling and has an excellent torque characteristic with high power reserves. This regulating system causes an efficient conversion of the engine output in hydraulic performance – which results in better utilization of the available engine power. The result means higher digging forces, shorter cycle times and lower fuel consumption. The R936 achieves particularly fast work cycles, thanks, for example, to the powerful slewing drive of the superstructure, the rapid slewing rates, and the creation of high slewing torque. Some of the tech onboard this version of the R 936 is the newly developed integrated excavator system technology. This is based on the Positive Control hydraulic system, controlled by electronics and the system software. The sensors located at strategic points on the machine form the basis for an intelligent system that allows for fast and fluent working. This Liebherr machine was fitted with a Lehnhoff quick coupler and a Rotar grab. All three brands fitted together make for a winning combination. You can see why Howard Stott invests in such quality brands. This outfit does demolition with style.