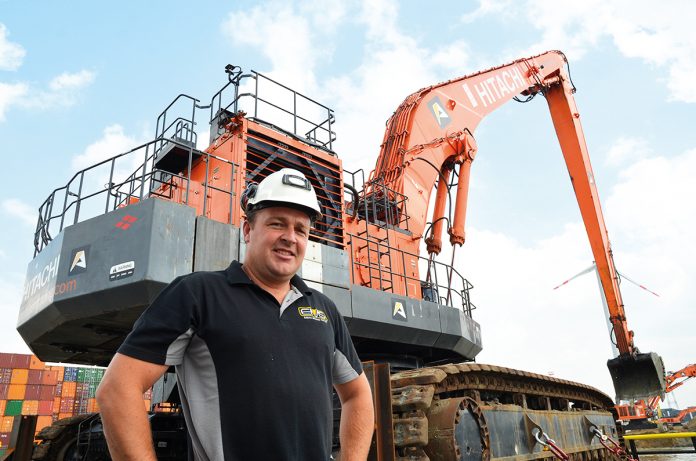 Two super-sized Hitachi excavators provide the deeper-digging muscle to shift 1.5 million cubes of material at a Belgium port project. Steven Vale gets up close to the two Grizzlies.

THE two, special adaptations of an EX1200-6 and EX1900-6, were supplied and reworked by Belgian dealer Luyckx for the family-owned Aertssen Group. Dealing first with the EX1900, this is the largest excavator in the Belgian earthworks company’s 2,000-strong machine fleet. Aertssen is no stranger to having brand new versions of Hitachis baby miner being ripped apart and reworked.

The first Dash-6 version (modified by the Belgian dealer to carry a 36.0m boom and stick) arrived in 2011. After 17,000 hours in the Middle East, where Aertssen has another earthworks division, it was recently sold and replaced by a new EX1900-6.

In standard configuration the EX1900 weighs around 190 tonnes. In its new guise, the company’s second excavator, and the one we saw in the Belgian port of Antwerp, is around 90 tonnes heavier and has a service weight of around 280 tonnes.

Some of this additional weight comes from the bespoke boom and stick on this super long reach excavator, which fully stretched nudges the phenomenal length of nearly 41.0m. In fact, the owner believes it could possibly be the world’s longest digging boom on a mobile tracked excavator.

The excavator is affectionately nicknamed as Daddy Grizzly, and I am grateful for the opportunity to get up close to it and its smaller Grizzly EX1200 sister, to find out what the two super-sized diggers are doing and how they differ to the standard configuration.

Aertssen Trading operations manager Bart Apers explains some of the technical details of the 2016-built machine and where all the extra weight was added.

Starting with the undercarriage of the EX1900, the tracks were lengthened by 3.0m. The H-frame was rotated by 90 degrees and new beams inserted at each corner. The resulting roughly 10.0m long x 9.3m wide package forms a sturdy base for increased stability.

In the digging department, there is no TAB (triple articulated boom). Instead, the gigantic two-piece 70-tonne front arm comprises a 23.0m (52-tonne) boom and 17.0m (18-tonne) stick. The three hefty main lift cylinders at the base of the boom all come from an EX1900. The giant boom is connected to the stick via two standard EX1900 stick cylinders and the bucket linkage is from a ZX870.

You could be forgiven for thinking the end of a 41m front arm supports a teaspoon. Wrong, because it is equipped with a 4.0cu.m MST-made bucket that has no trouble at all lifting 10.0+ tonnes at a time from the murky depths.
All this additional front end overhang does require a lot of extra rear weight to counterbalance though. “40.0t was added to the rear counterweight to bring the total to 72.0 tonnes,” says Mr Apers.