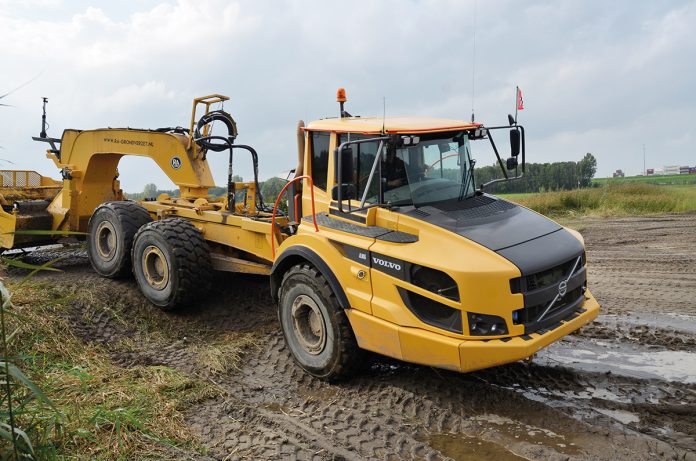 The striking combination belongs to Benny Ridderman and Nigel Argeloo, the ‘R’ and the ‘A’ behind RA Grondverzet (earthworks).

Before discussing the details, a bit of the background. The two men each own separate businesses, Nigel a road surfacing company with 12 fulltime staff and 20-odd mobile machines, while four Volvo A30Gs bought new in 2014, 2016, 2018 and 2020, form the basis of Benny’s earthworks firm.

Friends for nearly two decades, while Nigel earns a living from surfacing roads, his second big passion is earthmoving. Before starting his own business, he piloted a wide range of tracked and wheeled excavators, dozers and wheeled loaders, for different companies.

In his spare time, he and Benny regularly tinker with their machines, but 2019 was the first time they officially worked together when they formed RA Grondverzet.

The two men have long discussed a more efficient way to shift muck than an ADT. The dream machine they had in mind not only needed to increase capacity, but work unassisted without needing to be loaded by an excavator and the spoils levelled by a dozer.

These discussions intensified a couple of years ago when Nigel watched a video on the Canadian-made K-Tec twin-scrapers. After visiting the K-Tec stand at BAUMA 2019, they were soon on a flight to England to see a couple of this firm’s 21.0m³ capacity scrapers in action and have a play with the controls.

While pleased with what they saw, there were a few things they were keen to change and the 4.2m width was certainly an issue for transport. Back home, the two men approached Dutch scraper manufacturer AP Machinebouw to discuss their dream combination.

The request was to tow a pair of AP15s (15m³) behind an ADT, which they reckon is much stronger than an articulated tractor. While convinced that an ADT had plenty of power to pull a pair of scrapers, they were told this was not possible and the recommendation was to buy a wheeled or rubber-tracked articulated tractor.