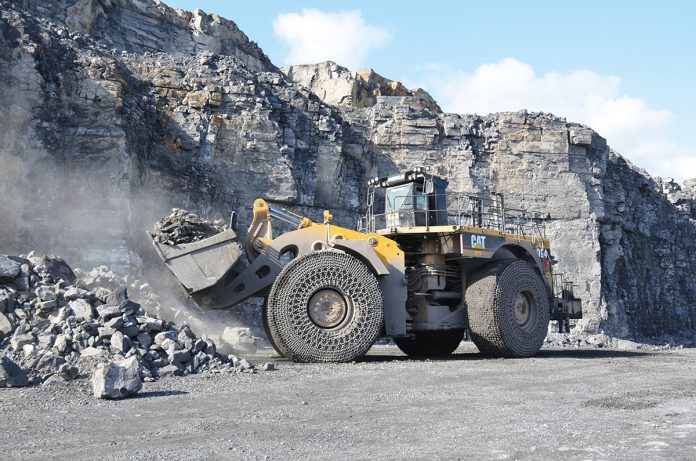 QUOTING exact figures is difficult, but to the best of my knowledge, the number of 994s in Europe can be counted on two hands. It is a rare beast. Almost 17m long, and over 6.5m tall to the top of the ROPS, the standard list arms hoist the monster bucket to a dizzy height of 11m. Reaching over the sides of the skips of the world’s largest haul trucks, most of 994s in Europe work in the large Scandinavian copper and iron ore mines. Two of them also worked for many years at the Belgian d’Antoing limestone quarry, the country’s largest.

Number one and the subject of this story, is believed to have been the first 994A to cross the Atlantic sometime in 1994. It was joined by the second and slightly more powerful Cat 994F in 2007. Quickly dubbed as Le Barbare (The Barbarian), the name on the first machine stems from the five mechanics that worked day and night to assemble it. The Cat supervisor that came to Belgium to assist with the works described the mechanics as barbarians, and my understanding is that one of them decided to add this name to the side of the machine.

Located near the town of Tournai in the west of the country, just a short drive from the French border, the two 994s use to fill the skips of a mixed nine-strong fleet of Dresser Haulpak 445Es and Unit Rig MT-2700s.

Flat out the 994’s 1,336hp 16-cylinder Cat 3516 engine drained 120lit/hr from the tank, and at its peak Le Barbare’s 18-cube bucket regularly shifted 35+ tonnes of limestone at a time and averaged 18,000 tonnes during two daily shifts.
The first Cat Certified Rebuild (CCR) took place after 25,000 hours, followed by a second with its clock on exactly 48,006 hours. The three-month job was completed in December 2008 when Le Barbare, now on its third engine, was upgraded from an A to a D Series model. In the end, the monster wheeled loader only worked 8,800 hours following the second CCR.

There were several reasons for axing the two 994s from the front line sometime 2013. The demise of the Belgian construction sector, which saw demand for aggregates, concrete and cement, nosedive during the recession years from 2008-2012, was the main one. Having two nearly 200-tonne wheeled loaders to fill the primary crusher with six million tonnes of limestone a year was ideal during the boom years. However, annual production fell by almost half so the quarry owners had no other option than to downsize the fleet accordingly.

Luxembourg-based CTR Machinery and Belgian firm Six Equipment were charged with the job of finding new homes for the two redundant 994s.
The newer 994F, which is nicknamed as Ton-Ton, was still up for grabs at the time of writing. However, the two partners have successfully managed to find a home for Le Barbare, which was recently sold to German recycling company Matthias Heyer Straßenbaustoffe. It took two days to dismantle the 5.2m-wide 994 for transport to its new home in Germany. Apparently, the most difficult job was to pull out the 160kg pins that secured the 20-tonne lift arms.

Fast approaching the grand old age of 27, parking an earthmover for so long is never good, although Rodolphe Vivier of CTR Machinery confirms that its engine was started, and the machine ran for an hour or so several times a year. “The engine oil was changed before the dismantling works started,” he said. “It needs a full service, but it has been well looked after and maintained and all the hydraulic hoses are in good condition.”