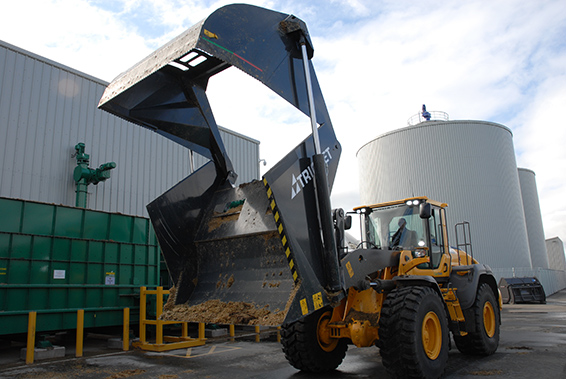 Beeswax Farming (Rainbow) Ltd has added a brand new Volvo L110H loading shovel to its fleet of equipment which has been put in charge of loading duties at the company’s recently commissioned state of the art anaerobic digester plant at Carrington, close to Boston in Lincolnshire.

The state of the art Biogas plant which has just come on stream will produce enough energy to supply 3 Megawatts of electricity per hour for the National Grid from a range of natural crops grown on the company’s own farmlands across Lincolnshire specifically for generating biogas. The main ingredients that are fed into the plant are maize and rye silage which is stored in dedicated clamps on the Carrington site.

Keeping the plant fed is a new nineteen tonne Volvo L110H which was chosen following a successful demonstration at Beeswax Farming’s Nocton facility near Lincoln, third party references and a competitive commercial package. The new loading shovel has been equipped with a Triomaster S300 3m³ silage cutter with a fixed blade. This bespoke attachment which is manufactured in Holland by Trioliet is designed to effortlessly cut or shear through silage without moving the stack. This ensures the silage wall remains in-tact and isn’t pulled loose or otherwise disturbed. Weighing in at 2150kg the attachment is ideally suited to the L110H which can handle up to 3000kg of material in one pass. In all approximately 150 tonnes of material is loaded into the plant on a daily basis.

Powered by a Tier IV final Volvo 8 litre engine developing 258 nett hp with a maximum torque of 1250Nm at just 1450rpm, the new L110H loading shovel features optional extras such as boom suspension or ride control in order to maximise load retention whilst traversing the site, single lever control for the boom and bucket functions, a Groeneveld automatic greasing system additional work lights and Volvo’s patented Optishift combining Reverse by Braking technology with a torque converter featuring lock-up. This eliminates power losses and can further reduce fuel consumption by as much as 18%.

In order to keep the Carrington anaerobic digester fed, the new Volvo L110H will be put to work over two shifts per day working seven days a week loading raw material into the plant’s four receivers. The resultant biogas that is generated powers two CHP (Combined Heat and Power) engines developing a total of 3 Megawatts of electricity per hour which is fed directly into the National Grid.