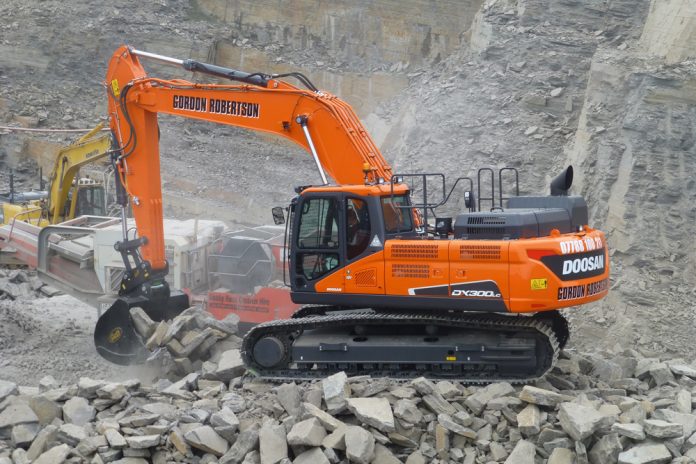 THE new DX300LC-5 was bought on the basis of the excellent performance of the 14-tonne and 6-tonne Doosan machines that have been part of the fleet at Gordon Robertson for the past six years.

Company owner Gordon Robertson said: ‘Our machines take part in all types of projects, including land drainage work in agriculture and house building. I have been very impressed by the performance and durability of all of the Doosan excavators since I purchased the first six-tonner in 2010. All of our drivers are delighted with the new DX300LC-5 excavator and have remarked how comfortable the cab is and how smooth the machine is to operate.’ 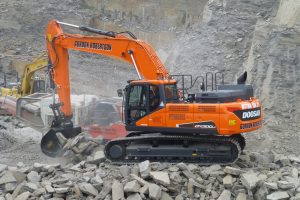 Mr Robertson was also impressed by the short delivery time of the Doosan excavator. He added: ‘The fact that Balgownie and Doosan could deliver the DX300LC-5 to me in just three weeks was a key purchasing factor. We needed the machine quickly to work with a new 3.5-tonne hydraulic breaker we had purchased for breaking out rock at the quarry and we are now producing 50% more aggregates on site since the new Doosan machine arrived.’

The DX300LC-5 excavator is powered by a Scania DC9 five-cylinder diesel engine, with an output of 202kW at 1,800 rev/min, which provides a 27% increase in engine power and a 30% boost in torque over the previous LC-3 model. The engine meets Stage IV emission regulations without the need of a diesel particulate filter (DPF) through the use of cooled exhaust gas recirculation (EGR) and selective catalyst reduction (SCR) after-treatment technologies.

Key features of the machine include: auto shut-off; and a ‘Trip Meter Setting’ screen that allows operators to check fuel consumption daily (or over any preselected period). To save more fuel, Doosan’s SPC (Smart Power Control) optimizes the balance between the pumps’ output and the diesel engine.

‘The new Doosan DX300LC-5 excavator is using 10 litres per hour less fuel than the two bigger 35-tonne machines I run at the quarry,’ said Mr Robertson. ‘This really begins to add up when you consider it equates to around 500 litres of fuel a week, which is a massive saving.’

Already spacious and ergonomic, the new cab in the DX300LC-5 machine has been further refined for superior operator comfort and ease of operation. The cab offers greater controllability with a new system that allows attachments to be operated from either the joystick or a two-way pedal. Users also have the unique jog shuttle switch which remains a feature exclusive to