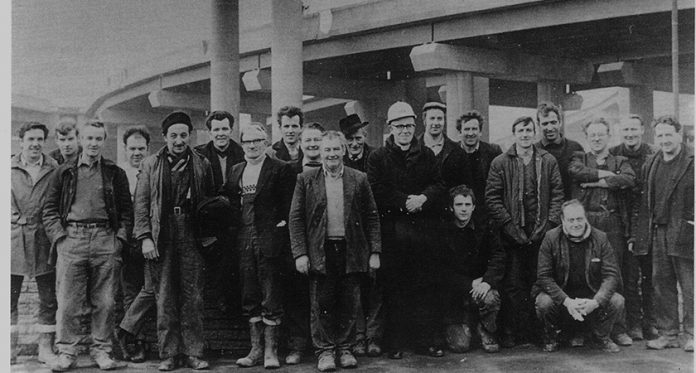 A BIRMINGHAM organisation is hoping to locate the Irish workers who feature in a now iconic image taken at the site of the city’s Spaghetti Junction.

Yvonne Price, of the Birmingham Irish Association, is leading the organisation’s We Built this City project, which was awarded a Heritage Lottery Fund grant of £55,000 this year to support a project marking the contribution of the Irish community in building the city`s well-known landmarks and roadworks.

Among the many plans she has for the project, she is hoping to locate the Irish men who were responsible for building what is known in the city as Spaghetti Junction, but is officially titled the Gravelly Hill Interchange, on Birmingham’s M6.

She hopes to find these men, or their families, through an image (above) taken by former Irish Post photographer Brendan Farrell of the workers on the day before the interchange was officially opened in 1972. 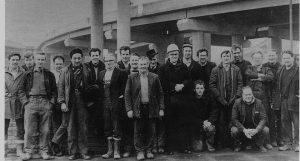 To date she has only managed to track down the identities of three men pictured in the image – which features 21 men in total.

“I am delighted to have the opportunity to co-ordinate this project, and finally show the wonderful contribution the Irish men and women made to the building our city in every sense of the word,” Ms Price told The Irish Post.

“In the construction industry alone, there were huge projects, such as Spaghetti Junction, many of the city centre’s squares and shopping centres, Symphony Hall, Star City and the old Birmingham Library just a few.”

Regarding her search for the Spaghetti Junction workers, she added: “I have only found three men from the photo as yet, sadly one has passed on, but his daughter contacted me, and another caller revealed that his dad was in the photo.”

Anyone who worked on the Spaghetti Junction build, or who knows of anyone in the photograph, should contact Ms Price on 0121 604 6111 or by emailing yvonne@birminghamirish.org.uk.