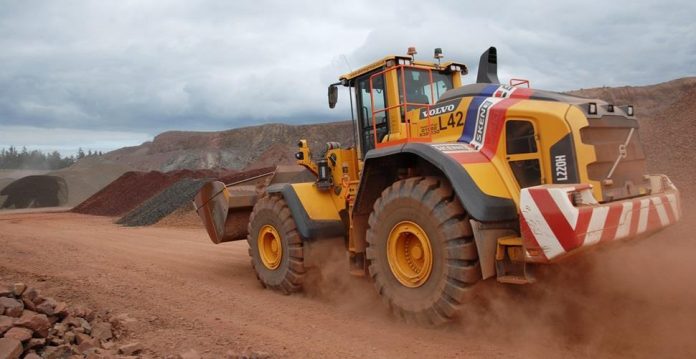 Joining its three year-old brother, the new recruit has been similarly specified to carry out duties in the rehandling and stocking out area at Skene Group’s Soutra Mains quarry. As with all of the Skene Group’s mobile fleet, the machine proudly displays its striking Skene Group logo and has been equipped with XMineD2 tyres and a 5.6m³ rehandling bucket, auto-lube and boom suspension. The 32-tonne shovel is powered by a 13-litre stage-IV final engine developing 373hp in a relatively low rpm range of between 1,300 and 1,400 rpm. The original machine has lived up to the expectations of Joint Managing Director, Darren Forrester, with regards to productivity, machine uptime and fuel economy and savings:

“The first L220H machine here at Soutra Mains replaced a smaller L180F to increase production and we considered the specification closely in order to achieve just a two-bucket pass loading out eight-wheeled lorries,” says Darren. “We’ve now added a second L220H on the strength of the reliability and productivity of the three year-old machine and in total we now run four loading shovels to cope with ever increasing demands on our production output since we introduced block-making and ready-mix production facilities in April 2015.”

As with Skene Group’s existing fleet of Volvo branded equipment, these newest arrivals have been supplied with Volvo’s Blue service agreements which are based on a fixed rate per scheduled service and a fixed rate for mileage, including oil sampling and regular inspections to be reviewed on an annual basis. “The decision to outsource the regular servicing, inspections and oil sampling back to the original manufacture makes perfect sense in our opinion,” says Darren. “Having Volvo looking after the equipment with their own trained engineers using genuine parts with the proper disposal of all used oils and materials gives us both peace of mind, and a tight control on each machine’s life time cost.”

The Skene Group has enjoyed steady growth since it was founded in 1968 by Donald Skene. It became a limited company in the late 1970s with the launch of its civil engineering, road building operations and demolition activities, then diversified into minerals in the 1980s, quarrying sand, gravel and hard rock deposits. The 1990s saw further expansion, this time into pre-cast and ready-mixed concrete products. Managing Director, Neil Skene, joined the business in 1984 and now oversees all its divisions providing sand and gravel quarrying, hard rock quarrying, concrete products and construction services along with Joint Managing Director, Darren Forrester.