Automated earthworks: Topcon’s machine control and automation technology has been used to support major road improvement earthworks on the A14.

Due to open in December 2020, the £1.5 billion project will see upgrades to 21 miles of the A14, increasing capacity and cutting up to 20 minutes off journeys. The works include the creation of a major new bypass around Huntingdon, improvements to junctions and widening of the existing A14 between Swavesey and Milton. 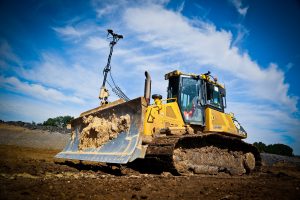 Walters Group was one of two specialists appointed by the A14 IDT to carry out the earthworks required to deliver the scheme. For their section of the project, this would see a need to move an estimated 12 million cubic metres of earth.

The vast scale of the excavations meant that Walters Group needed equipment and technology that would give them the most accurate results on-site. The team were already familiar with the range of Topcon technology and chose to use the Topcon 3D machine control systems on excavators and dozers.

“We started using Topcon equipment around seven or eight years ago,” explains Andrew Burder, Earthworks project manager at Walters Group/A14 Integrated Delivery Team. “The drivers get on with it really well because it’s quite easy to use. We message them and they’re able to message us back. They know when we’re going to use it remotely and we tell them when we’re going to play around with their system, so they know if anything will change on their screens.”

The Topcon 3D machine control platform has been designed to provide unmatched material control capability, and acts as a productivity tool. It simplifies grading and gives operators the opportunity to put the focus on material and safety. By using the SiteLink 3D, any potential machine downtime is significantly reduced as most issues can be resolved in real-time without the need for a technical team on-site. 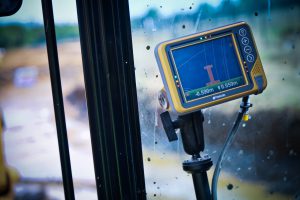 As part of the 3D machine control software, Topcon’s SiteLink3D was used as a way of connecting the machines and the office. The technology provides remote access and support to every machine connected to the system, including file transfers, messaging and reporting and analytics.

“If drivers need to activate the service or they don’t know how to select a line or choose an offset, I can remotely access their screen on my desktop and change what it is they need to change,” explains Martin Langhorn, sub agent at Walters Group/A14 Integrated Delivery Team. “I can also delete and add different models to their screen so they never get mixed up or use an old revision by mistake.” 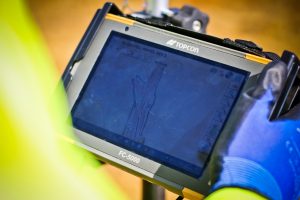 Other Topcon technology used as part of the project included the Topcon GNSS receivers and Topcon FC-5000 hand-held field computers, as well as SiteLink3D in partnership with Walters Group.

Mark Lawton, survey manager for the A14 Integrated Delivery Team, commented: “SiteLink makes my life easier because of its efficiencies. We’ve got the data links out there so we can send data from the office to the machines, and another critical factor is that the people planting phase has been reduced – there are no people working around the machines. The quality of the data being sent to the machines is always consistent too.”

Mark concluded: “We’ve used 3D machine control on a number of sites before and we’ve asked our contractors to adopt this too. Walters have taken this a step further and pushed it wider into their fleet, and now we’re starting to reap the benefits of that. Topcon has made innovation reality, and 3D machine control is business as usual now.”