Brigade Electronics returns to Hillhead this year with a range of robust vehicle safety devices including Backsense®, the most affordable radar on the market and NEW Backsense® Network-radar designed for OEM’s.

Brigade’s Backsense® emits a continuous wave radar which is faster than competitor pulsed radar products. The sensor system (BS-8000) controls the radar beam pattern, so the spread of the beam can be restricted to the width of the plant for the length of the detection area, to minimise false alerts on a busy site. The unit is fixed to an adjustable mounting bracket, meaning the radar can be directed at different angles to optimise detection performance and to help prevent ground detections when approaching ramps. Backsense is ideal for machines including; mobile cranes, telehandlers and even concrete pumping machines. 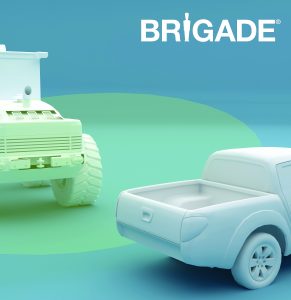 The in-cab display has a clear, easy-to-read visual warning with five LEDs corresponding to five distance zones from the vehicle. The audible warning buzzer, although adjustable, cannot be switched off, eliminating the possibility of driver interference and providing fleet operators with peace of mind.

Brigade offer a range of Backsense® models with programmable and fixed detection zones of up to 30 meters, dependent on customer requirements, a considerably larger range than that offered by other products. The rugged design, in line with IP69K standards, allows the sensors to operate effectively in areas of harsh terrain, dust and in poor weather conditions. Backsense® is designed by Brigade’s in house engineering team and is the most affordable radar product on the market.

Due to the number of complex blind spots on a vehicle, a single radar cannot always provide the detection needed and numerous in-cab displays for multiple radars can be more of a distraction than a benefit.

Aimed at OEM and specialist application markets, Brigade’s Backsense® Network-Radar allows operators to connect and link up to eight sensors to cover large, sometimes complex blind spot zones around the vehicle or machine.

The system provides object detection in CAN (Controller Area Network) message format which may be processed to display data on control panels/displays on the vehicle or used to control aspects of the machine.

Each connected radar sensor is allocated a unique ID and will transmit data for up to 8 close objects. With a detection range of up to 30m length and 10m width, it provides a flexible system to meet customer specific requirements. This type of radar is especially suited to larger pieces of plant equipment such as; wheel loaders, excavators and tippers.

Brigade’s new Backeye®360, also on display, has been upgraded with greater flexibility allowing configuration and views to be tailored to each application. The layout on the monitor has also been improved to increase the image size by 22 per cent, regardless of monitor size, making blind spots even more visible to the driver.

Brigade’s white sound reversing alarms (bbs-tek®) remain the only directional alarms on the market, making them the safest. In a similar way that a person reacts to a snapped twig, the broad band sound frequency is instantly locatable. This means that a person knows which direction they need to move in to be safe unlike other alarms.

The unique alarm is approved by the Noise Abatement Society and has the Quiet Mark accreditation. It can be used to reverse safely without causing a noise nuisance and can only be heard in the danger zone, unlike conventional alarms that can be heard up to thirty times the distance required. The alarm emits a “ssh-ssh” sound which is less irritating than the shrill beep-beep of other alarms. White sound alarms are specified in the HS2 specification and also required for FORS to reduce noise levels and make sites near residential areas quieter. Visit Brigade at Hillhead on stand Q12.